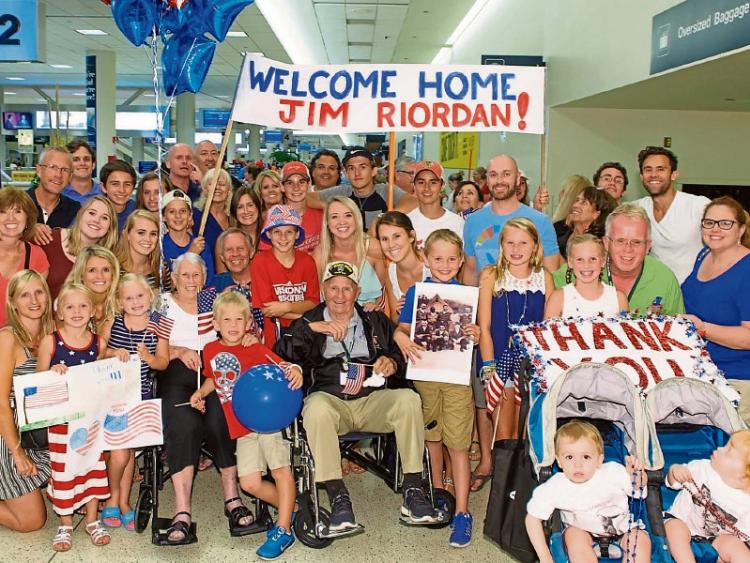 Jim Riordan’s family welcome him home to Chicago. Below, opening the fruit cake sent by his niece, hotelier Mary Fitzgerald

A FRUITCAKE, made and posted from Banard, Abbeyfeale in late 1952  travelled more than 10,000 miles or 16,000 kilometres to arrive on the US  frontline in Korea in perfect condition.

The cake was sent to Jim Riordan, who had emigrated from the family home in Banard in 1948 at the age of 19 and had  been drafted into the US Army in 1951.

Recalling the family story this week, Mary Fitzgerald of Fitzgerald’s Woodlands House Hotel explained that her mother was Jim’s sister, Nell. “She was a great one for brainwaves,” she said. “She baked a fruitcake and sent it off in a cake tin.”

The tin, with its precious cake, travelled to Chicago, then to the army depot and from there to the frontline where Jim was serving during the Korean War.  “It was a minor miracle. It arrived in perfect condition,”

For Jim, posted on the frontlines in difficult conditions,  the cake was a godsend which he shared with his army comrades in the trenches.

Over six decades later, Mary Fitzgerald sent her uncle another fruitcake, marking that extraordinary little event but also marking his “honour flight” from his home in Chicago to visit the US War Memorials in Washington DC.

The trip, earlier this month, was organised by  Honor Flight Chicago, a non-profit organisation which flies World War II and Korean War veterans to see the memorials built in their honour.

“It was the best day of my life,” Jim Riordan told his niece Mary.

Huge numbers of Jim’s children, grandchildren and great-grandchildren met Jim at the airport to share in the occasion  “I can die happy now,” he told them.

In the detailed story of his life prepared by  his son Michael, Jim recalled the 10 months he spent on the frontline in Korea  where he was promoted to the rank of sergeant.

He, and his squad of eight or nine men, spent most of their time in the bunkers built by Korean labourers or in sand-bagged foxholes.

“In the trenches, they ate mostly rations,” Michael writes. “Jim remembers that the rations would be frozen in the winter and they would use their bayonets to break them up. He says his worst day in the war was Christmas Day on the front line, sitting in a foxhole, freezing, eating rations, awaiting the next wave of enemy fire, and knowing that back home he would have been enjoying family, friends, good food, comfort and safety.”

The memoir also recalls an incident in which Jim saved a comrade’s life, another when he himself had a very near miss and also tells of humane interactions with local civilians.

The journey back to the US was also gruelling.  It took seven weeks by ship, passing Japan and Hawaii, rounding Cape Horn in South America before eventually docking in New York.

“The bunks were stacked six high with barely enough room in between for a man to lie” , Jim recalled for his son and they were also hungry. “We only got three small meals a day”.

Back in civilian land and discharged from the army in November, 1953,  Jim was automatically awarded US citizenship and settled in Chicago where he married Margaret, the woman he had become engaged to before leaving for Korea.

Jim worked nights for over 35 years as a fireman in the boiler room of Sears on the west side of Chicago and during the day, he worked full time at “side jobs” as a painter.

But speaking of his time in the army, he said: , “It didn’t do me any harm. The army never taught me anything bad, and I never caused them any problem. I’m very proud of being in the army, and I put my American flag out every day!”

Jim and Margaret  have been happily married for the past 63 years and have nine children.

A large number of these children as well as grandchildren and great grandchildren gathered at the airport along to welcome Jim back from his Honor Flight to Washington.

Jim and other veterans were greeted by their families and with music and flags as a way of saying thank you for what you did, Jim’s son John explained.

Many Riordan relatives still live in and around Abbeyfeale while his sister Theresa Boylan is well known in Limerick as a B&B proprietor on Davis Rd. Jim will be 88 later this year.