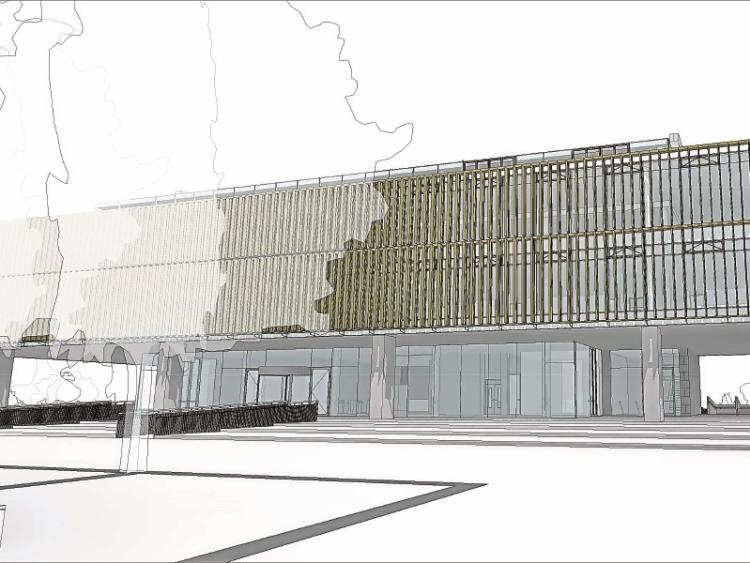 Architect’s impression: How MIC’s new library should look once it is complete in 2018

MARY Immaculate College is to invest over €21m in building a new library on its campus at the South Circular Road.

Plans due to be lodged with Limerick City and County Council reveal that the current library – opened in 1976 – will be demolished in stages to allow the new 4,955 square metre building to be built.

The application will also provide for the removal of 17 trees, and a proposed new paved plaza to the south-west of the new library building, which will be located in the heart of the campus.

The trees which will be felled will also be replaced with the same number at the college, which provides teacher training courses.

Mary Immaculate College’s president, Professor Michel A Hayes said the original library was built for a student population of just 750.

Since its opening, he said the college’s student numbers have increased five-fold, with 5,000 set to enrol by 2020.

He added the way students lean has changed beyond recognition in that time.

“These factors, coupled with very significant advances in building standards and regulations means the current library is no longer fit for purpose,” he said.

As a result of the knocking of the old library and its replacement, a new outdoor civic space will be created.

The new library will feature a range of learning areas from silent study blocks to lively group work rooms.

The building will also have a 288 lecture theatre, media editing suites, a media studio and seminar rooms.

If Mary Immaculate College is successful in gaining planning permission, it is hoped the new library will be operational by the end of 2018.

Councillor Joe Leddin, who lives next door to the college, has given the new development a big welcome.

“It is another investment not just in terms of the facilities Mary Immaculate is offering its students, but also education in Limerick.

"The library there has certainly outlived its usefulness in terms of the facilities it offers, and I think for any modern third level institution, it is important they can survive where feasible and possible in first class facilities such as learning rooms, where students are working together in a collaborative manner.

"They didn’t have these facilities in the old building,” Cllr Leddin told the Limerick Leader.