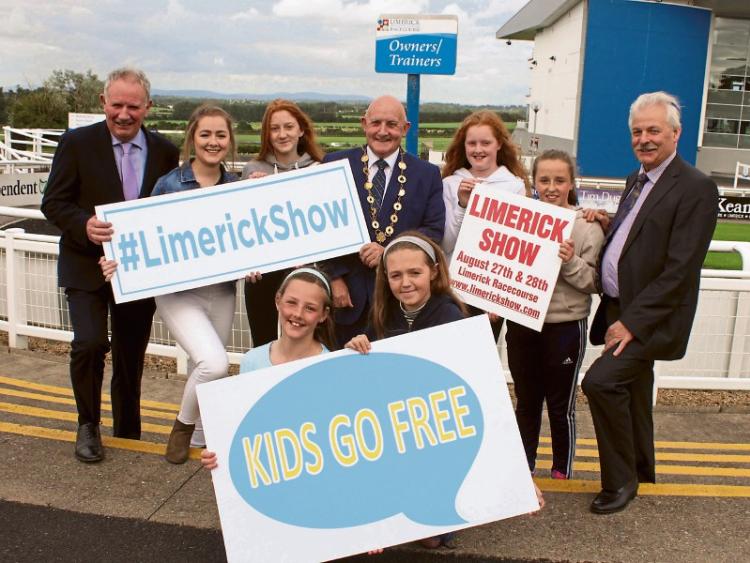 THE LIMERICK Show was founded in the 1880s and remains as much a part of local life now, as it was then.

Only World War I could stop it in its tracks but it made a triumphant comeback in 1929 when 10,000 people attended.

This year’s renewal takes place on Saturday and Sunday, August 27 and 28 in Limerick Racecourse. Over the course of the weekend up to 15,000 visitors, 1,000 competitors and 150 trade exhibitors will descend on the venue.

At the well-attended launch, Limerick Show chairman, Richard Kennedy got the loudest round of applause when he was congratulated on being elected IFA deputy president. He  explained  how the show is moving with the times.

“Limerick Show has been a huge part of the social calendar since the first show. This tradition lives on today and the show is now a place where people from city and county come together. We are delighted to have lots of new attractions at this year’s show, there really is something for everyone,” said Mr Kennedy, who thanked the hard-working Limerick Show committee and every sponsor.

“Without sponsorship we wouldn’t be able to provide two days of community entertainment,” said Mr Kennedy. He added that there is a “tendency to sit at home” but he encouraged one and all to come to Limerick Show and have two extremely enjoyable days.

The committee has put extra emphasis in recent years in making it a day out for all the family and this is really paying dividends.

A new “Kids Zone” is available with free bouncy castles, slides, face painting and lots more. New to the show this year is a circus-skills workshop. Children under 12 go free so there really is no excuse to leave them at home. The committee have thought of everything as there will be a kiddies train going around the show grounds in case they get tired. Even the adults could be tempted to hop on board as there is so much to see and do!

Limerick Show is renowned for showcasing the best of Irish horse breeding. This year is no exception as one of the special features is the Festival of Traditional Irish Breeding on the Saturday presented by the Traditional Irish Horse Association (TIHA). The total prize fund for the festival is in excess of €11,000. This incorporates the famous Limerick Lady and Matron Championships.

Saturday also sees the return of the very successful TIHA Hunter Performance Championship at noon, followed by the TIHA Small Hunter Performance Class which is a new addition for 2016. Both of these classes have a total prize fund of €4500 between them.

As always, there is a wide range of show jumping classes on Saturday and Sunday this year. One of the highlights is the Grand Prix on Sunday – attracting riders from all over the country for this prestigious class.

Cattle enthusiasts also have lots to look forward to over the weekend. The move of having dairy on Saturday and beef on Sunday proved a big success last year and it is being repeated. See next week’s Farm Leader for more information on the cattle section.

The family dog show is one of the big draws on Sunday at 1pm. Visitors can shop to their hearts’ content at the indoor and outdoor retail village, enjoy artisan food stalls, see farm machinery and much more. Other animals on show include sheep, goats, poultry. While entrants will be waiting keenly to see if their craft, art, photography, baking and horticulture exhibits earn a rosette. A new class this year is Limerick Lace which will be covered in more detail on show day as it celebrates a part of our heritage that was nearly lost.

At the launch, Cllr Kieran O’Hanlon made a little piece of history as he is the first city mayor to address the crowd.

“Limerick Show is loved by young and old. I can remember growing up how much I looked forward to the show. As a boy born and bred in the city, it gave me an opportunity to see a different slice of Irish life, one that was just as vibrant, challenging and fun as my own.

“Rural Ireland has always been the heartbeat of Ireland and this is most definitely demonstrated in Limerick Show,” said Mayor O’Hanlon. The only bad thing about the show was that it signalled the end of school holidays, he joked.

To entice more people from the city a free bus will leave Brown Thomas in the city centre and UHL. Dooradoyle, at noon and 2pm each day, returning by arrangement with the driver.

You won’t regret it!