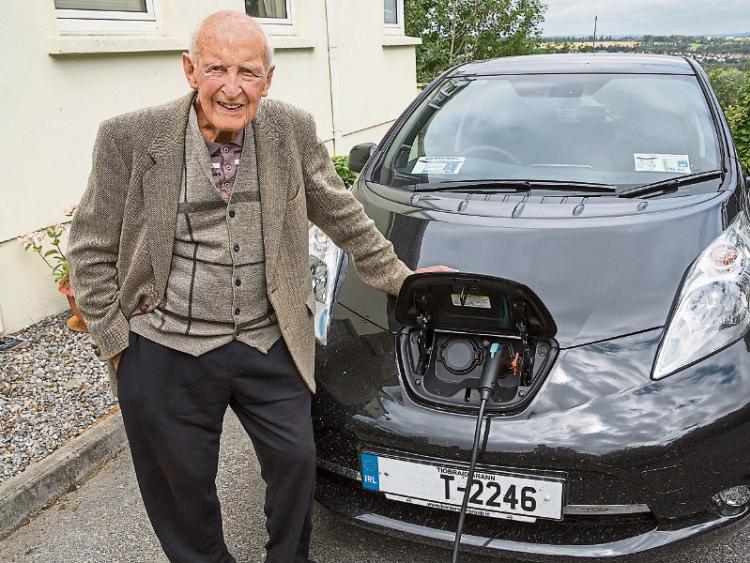 CENTENARIAN John Walsh, who has been making headlines in recent days following his purchase of a new electric car, says he plans to use it to visit Foynes, the place where he grew up.

The 100-year-old Clonmel man recently bought a Nissan Leaf electric vehicle, and has been taking advantage of the resultant publicity to highlight his concern for the environment.

A former chief accountant with Bulmers, John moved to Foynes at the age of 12 in 1927 after his father got a job as manager of the BP garage installation there.

The family lived for a number of years in the old Monteagle hotel, the building which now houses the Foynes Flying Boat and Maritime Museum.

Indeed, John is a regular visitor to the museum, according to its operations and records manager, Barry O’Kelly.

“He comes down to us regularly. The last time was about a year ago,” said Barry.

In a memoir written some years ago, John recalls his youth in Foynes, part of which coincided with the beginning of the flying boat era in 1937. He also writes about his memories of Foynes Port and many of the people he met during that time including the O’Brien family of Foynes island.

It was during this time that he got his first experience of driving – in his father’s old Model T Ford. “He had a few of them in his day and we used them to go back to Cork,” he recalled. “It was a hell of a journey, 70 miles each way, driving 20mph at best. We had two accidents and I wasn’t in either, which was quite the achievement.”

Now, more than 80 years later, he hope to use his new electric car to revisit the West Limerick village as well as various other places of interest. “My reason for going electric was absolutely environmental. It was the one and only reason. I am not into cars and I had no wish to update the car...but I happened to have the money, the bank were paying me nothing and I decided to go for it,” he told Ryan Tubridy on RTE Radio 1.

John will celebrate his 101st birthday on September 10 but says that since turning 80, he has been taking each month as it comes. “I very consistently left the date of my demise in the hand of the Lord ever since and I have become extremely good at it. I don’t look forward more than a month now.”