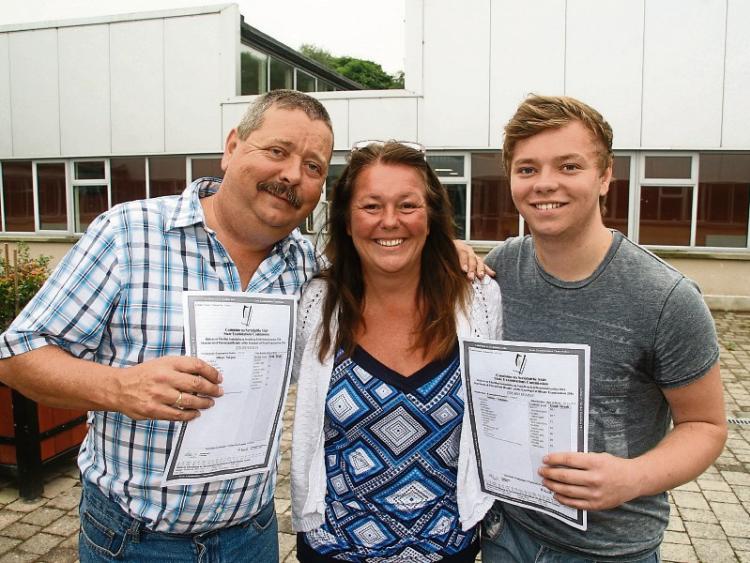 Mum Miriam celebrates as her husband Gerard Snr and son Gerard Jnr both receive their results in the Leaving Cert Picture: Adrian Butler

IT was a proud day for father and son Gerard Kearns Snr and Jnr who both received their Leaving Certificate results in Limerick this Wednesday.

They attended different schools, and there is 30 years between them, but their similar expressions of delight both spoke volumes.

From Woodview, it was not the only celebration in the family that day, as Gerard Snr and wife Miriam were celebrating their 25th wedding anniversary.

Gerard Snr said he had been employed in the manufacturing business for over 20 years, but when the recession hit he felt it was necessary to upskill.

“I finished up a few years ago, and have applied for a lot of jobs and the minimum requirement is having your Leaving Certificate. I’ll keep looking for work now, and hopefully I’ll get some employments,” said Gerard Snr, 47.

He undertook his studies at the Further Education & Training Centre, on the Kilmallock Road Campus, and collected his results, accompanied by his son, who picked his up earlier that morning from Ardscoil Ris on the North Circular Road.

“I’m over the moon for the two of us. It feels great. We put our heads down for the year and it took a lot of commitment. The teachers here for excellent, and they went above and beyond to help you,” he told the Limerick Leader.

​Gerard Jnr, 17, is looking forward to going on to study sports recreation and fitness at Limerick Senior College.

Up to 60 students, aged from their 20s to early 60s, undertook the Leaving Certificate course at the Kilmallock Road campus, which has moved in recent years from Sexton Street.

Among them was mother of two Oumabouha Hajalshikh, 31, from Sudan, who has been living in Limerick for six years. Now an Irish citizen, she is looking forward to studying applied biology in Limerick Institute of Technology in September.

Kristine Platace, 26, who was born in Latvia and grew up in Russia, moved to Limerick on her own aged 18 and got her first job here in Dunnes Stores on the Childers Road.

Like many others, she said having the Leaving Certificate under her belt is a necessary first step to getting a better job in Ireland. She is hoping to get the points to study international business in the University of Limerick.

Arkadiusz Kulasa, 37, from Poland and living in Castletroy, undertook his Leaving Cert to improve his English in the hope of getting a job, and said he was very happy with his results. “It’s very difficult to find a job if your English isn’t quite good enough. I hope this will help. I have a similar qualification from my school in Poland, but that doesn’t mean the same for Irish employers,” he said.

However, principals across the county were at pains to stress that points are not everything, and that there are several routes for students to take to reach the course and the profession they want.

Padraic Flanagan, the principal of Castletroy College, which saw nearly 200 students receive their results, said the feelings of joy and relief amongst their students were palpable. They had “very strong results”, with a number of students receiving in excess of 600 points.

“There was no disappointment, no upset. It really was a joyous morning,” said Mr Flanagan.

“The results you get should in no way define you. There are so many pathways nowadays.”

However, one of the injustices of the system, he feels, is the wait in receiving courses from the two rounds in the CAO system.

“It’s unfortunate [they have to wait] and so unnecessary, and it places a lot of stress on students,” he said.

He said the statistics nationally of a high proportion failing Mathematics was not reflected in their results, and something staff felt a bit puzzled by as “the paper last June was relatively kind”.

“Results in English and Maths in particular were very strong, with no surprises for us,” he added.

Commenting on their hurlers who got their results this morning, he said: “People involved in sport always do well, and they are so happy. They’re looking forward to a future of more hurling in third level, which is great.”

Hurler Brian Nash, 18, from Ballyneety, and a corner-back with South Liberties club, said he was “happy out” and wants to do engineering in UL.

Asked if he’d be celebrating, he said he’d have to check with his coaches, though he had a break from training this Wednesday.

He said it was hard at first to balance training and studying “but fine once you get into a routine”.

As he approached his first All-Ireland he joked that he’s more nervous about that than the Leaving Cert results.

Centre-back hurler Darren Golden O’Mahony, 18, from Castletroy, also wants to do business in UL, but is anxious to see if there is a points rise.

The Monaleen player got to the All-Ireland quarter-final last year, and said the nerves will kick in again with the big match coming up.

“If we win that’s probably a life-time success right there,” he said. “We don’t get many nights out, but we’ll take it easy. The match is the most important thing.”