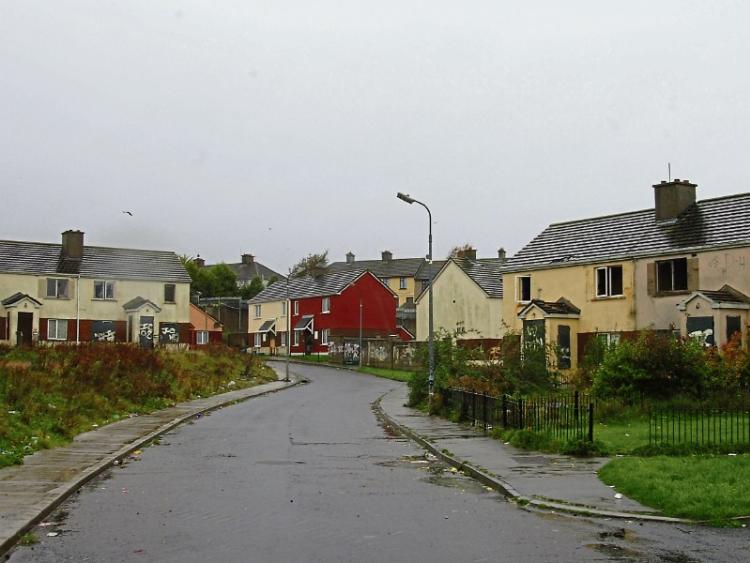 Clarina Park in Ballinacurra Weston, pictured here in 2008. This land is now an empty green field after some 40 units were demolished

A SENIOR council official believes Limerick would not have enjoyed the same level of investment were it not for Regeneration.

Seamus Hanrahan, the council officer in charge of the process, says that when assessing the last eight years of the housing project, people must assess what the city was like in 2008.

Speaking on Live95FM this week, he said: “We have to look back at what conditions were like eight years ago. I think it is fair to say we were heading to a point in Limerick where social disorder and social breakdown was a very real factor. We are in a completely different space now in Limerick than in that period.”

But his claim was dismissed as “utter nonsense” by Weston Gardens activist Cathal McCarthy, who said if anything the problems have become worse in Ballinacurra Weston since the onset of the project.

“Ballinacurra Weston was much better off without Regeneration. There were social problems. But these remain. They have not been tackled. People have been displaced, and we have more green spaces and anti-social behaviour there.”

Independent councillor John Gilligan believes Limerick was “going down the tubes” around 2008 – but added Regeneration cannot take credit for its renaissance. He said: “From that particular point of view, I would like to say the gardai totally transformed these places. Some areas descended into anarchy. We were sinking, and we were waving like hell.”

But as a result of the Regeneration process, Limerick got 100 extra gardai, a key plank of the Fitzgerald report.

But Mr McCarthy said the service they provided “was never intensive, it was piecemeal.”: “We were supposed to get a special Regeneration superintendent. That never materialised. We got 100 extra gardai. If we had 24/7 coverage, you'd have to ask yourself how so many houses got looted for copper, or burnt out in that period? This all happened in the day,” he said.

Both Mr McCarthy and Cllr Gilligan have also questioned the wisdom of demolishing over 1,000 homes – a figure disclosed by the Limerick Leader last week – saying many were still in habitable condition.

“There was very little physically wrong with some of the houses. I think it is disgusting that anybody could decide to demolish 3,000 homes without consulting the people first,” he said.,The original Regeneration plan, launched in 2008, outlined plans to demolish this number of units – a figure which reached a third of the way before the council changed policy and focused instead on renovations.

Cllr Gilligan said he “fully agreed” with the demolition of units in St Mary’s Park – but not the “one size fits all policy” which would have seen homes knocked in Southill and Moyross. “The houses in St Mary's Park were built in 1935. The cement at that stage had a life span of 70 years. They are gone past their sell-by date, “ he argued.