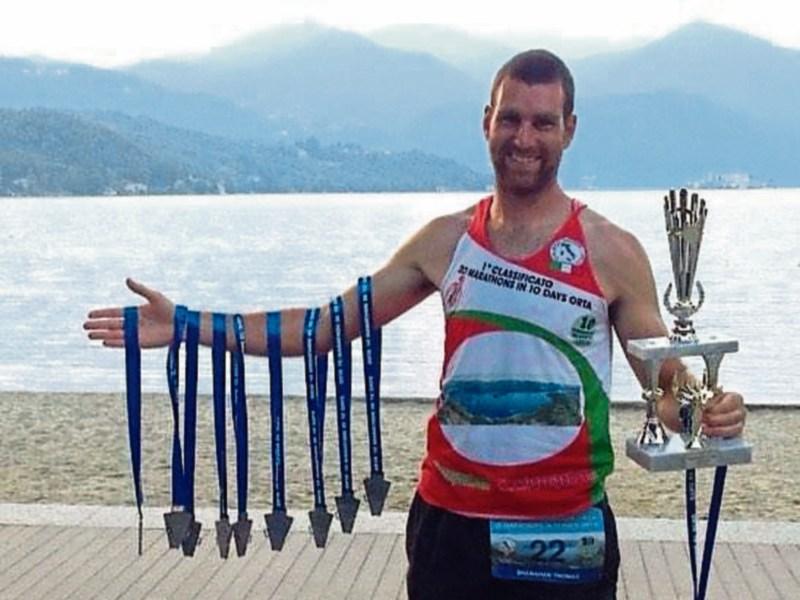 Thomas Shanahan, 30, from Caherdavin, with his set of medals after winning the race

But a 30 year-old Limerick student has gone one better and completed 20 marathons in 10 days in Italy, in what is believed to be a new world record, according to the organisers.

Thomas Shanahan, from Caherdavin, a quantity surveying student at Limerick Institute of Technology, has just completed his marathon challenge, after signing up just a fortnight before the race.

“Two weeks before the race I booked my plane ticket and contacted the organisers to ask if I could still enter, and they said ‘No problem, pay when you get here,” Thomas told the Limerick Leader.

He entered the €400 fee, which included free accommodation in a local gym – but you had to bring your own sleeping bag.

“It was brutal to be honest, so I booked into a hotel, because I just really needed my sleep,” he explained.

However, Thomas is no stranger to running. As a member of Limerick AC, he ran 52 marathons before this – across the world and throughout Ireland.

Getting through his first ever marathon was “a fluke”, he said, but “I got such a good buzz from it, I am now addicted and have done about 13 this year.”

He took on the first of 20 official marathons – totalling 520 miles – Lake Orta in Italy, in northern Italy, west of Lake Maggiore and north of Milan, on Saturday, August 6.

And he ran the same course 20 times – or the same six miles about 80 times.

“It wasn’t as bad as it sounds,” he laughed. “The course and this area is absolutely stunning. The only thing that was difficult was running in heat of 30-plus degrees every day, but I had been training in the Bikram yoga centre in Limerick for a few months before I decided to enter so that possibly helped”.

In all, just 12 brave souls signed up for the 20 marathons in 10 days challenge, and slowly but surely, just two remained, including Thomas, and another athlete who finished some five hours behind him overall.

He undertook this phenomenal challenge to raise funds for Limerick Animal Welfare (LAW), and has set himself a target of €5,000, with half that sum now being raised.

Thomas said he felt compelled to raise as much money as possible for LAW, due to their “fantastic and tireless work, done by their wonderful volunteers” and to help “the defenseless creatures they save daily”.

“My friends will know I've never asked for donations before but this time I feel that this challenge can raise some money which I would be thrilled to do,” he explained.

The organisers of the race said that “this is the first 20 [marathon route] in 10 [days] competition in the world”.

He vowed that every cent raised will go directly to the charity’s bank account at 125 O'Connell Street. LAW continues to seek funds to support its animal sanctuary in county Limerick, which supports over 200 animals, including dogs, cats, rabbits, goats, horses and donkeys.