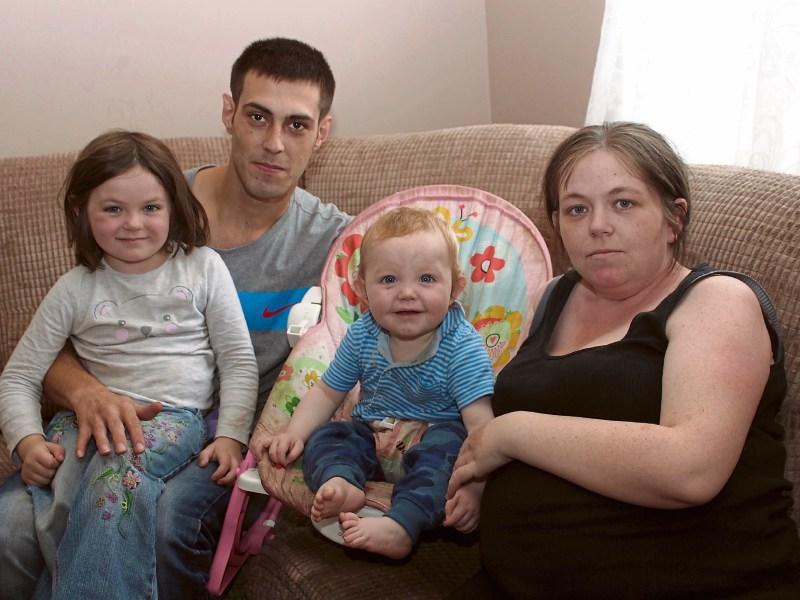 A HEAVILY pregnant mum of two is 'couch-surfing' with her two kids following eviction from her own mother’s home in Limerick city.

And the council has warned her mother that they will be monitoring CCTV footage in the area to make sure she does not stay in the house in Ballynanty.

Rachel Cribbin, 29, who is expecting her seventh child in less than eight weeks, told the Limerick Leader that the local authority has warned her mother Pauline that it could seek possession of the property through the courts if her daughter, partner and two of her six children continue to live there.

“We genuinely don’t have anywhere to go. No one is willing to help us. We have been to everyone and anyone who can, but we’re going around in circles.

“I’m due to give birth in early October, but I’ve been told I could go into labour any day now as it’s a high risk pregnancy. This was my family home nearly all my life – now I’m not even supposed to stand outside the gate. We are worn out from this.”

The couple are in receipt of disability allowance but said they can’t afford to rent in the city as the prices are now “absolutely scandalous”.

For the past fortnight the couple and two children have been couch-surfing at the homes of friends, and say they have been unable to get assistance from housing organisations, despite the seriousness of their situation.

Rachel said her partner Dan sleeps on the floor and her one-year-old son Daniel sleeps in his buggy, while her four-year-old daughter Abby sleeps with her on any available couch they can find with friends.

The council, in a letter, told Pauline Cribbin, of Shanbooley Road, Ballynanty, that she is in breach of Section 4 of the letting agreement by allowing daughter Rachel, partner Dan and two children live in the three-bedroom house without permission. But Rachel, whose four other children reside elsewhere at present, said she has lived there nearly all her life.

The council also complained that under Section 10 and Section 13 of the letting agreement that Rachel was keeping a dog at the property which caused a nuisance to neighbours due to noise.

The authority ordered Rachel and her partner, Dan Broadleday, who is from Jersey and served 10 years with the British Army, to leave the property by August 3, and that her mother “not invite them or allow [them] to remain on any part of the dwelling, curtilage or garden”.

It also warned Mrs Cribbin that under Section 6 of the agreement that if she leaves the property for longer than six weeks she has to receive written consent from the council. The local authority expressed a belief that she had travelled to Australia for more than six weeks, but her daughter said she was there for five weeks.

“The council will monitor the situation by all means available, including but not limited to CCTV,” states the letter from a tenancy enforcement officer.

One of her other children is staying with a godmother and others are with former partners. Rachel believes that if she had her own home they could all live together.

There are now over 4,300 people on the council’s housing waiting list. Daft.ie currently lists just 60 properties for rent between the city and suburbs.