The story behind the photograph: Learning from a Limerick master 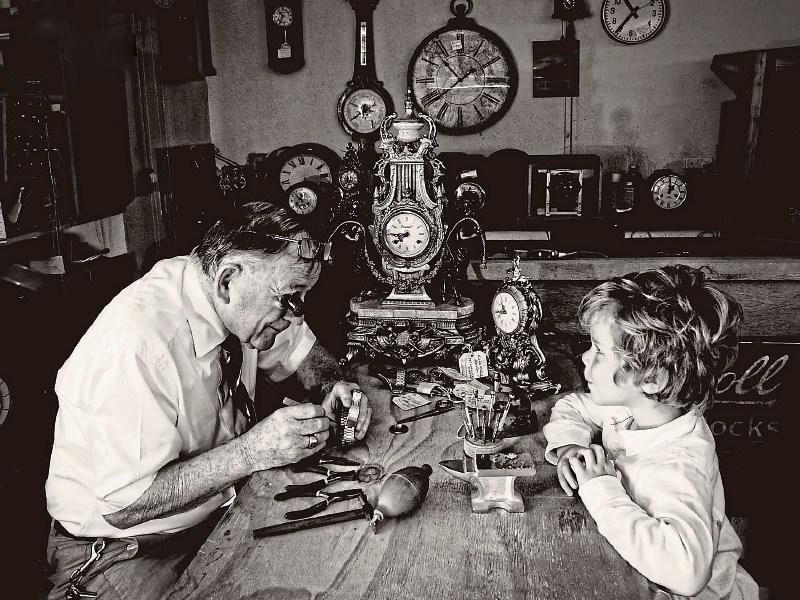 Photographer Shane Larkin of Michael Martin photography captured this personal moment of jeweller J.J. Kenneally, 86, and his grandson Robbie, age three, at work in his studio

LIFE happens when you're busy making other plans, but award-winning photographer Shane Larkin didn't miss his chance to take a shot of this personal moment between a Limerick grand-father and his youngest grandchild.

Shane, who works with Michael Martin photography on Upper Gerald Griffin Street, was after a cycle with Robbie Kenneally, when he was in premises of the well-known Limerick jewellers and couldn't believe his eyes.

“Shane actually nearly fell down the stairs as he ran so fast to get his camera. He just said ‘Give me two minutes, I’ll be back’. It’s such a lovely, natural shot,” said Robert, the son of J.J. and father of Robbie, age three and a half in this picture.

It was an everyday moment for the family, but Shane quickly saw its potential.

At 86, jeweller J.J. Kenneally, of the Mill Road, is still working, though he has cut his work down from six days a week to five.

“The only way he'll retire is when Tony Cross [of the funeral home] comes to collect him,” laughed Robert.

Established in 1959, the business counts nine staff, and grandson Robbie, the youngest grandchild of seven, and the only heir to the Kenneally name in the family, likes to keep a watchful eye over his grandfather's work, even at this tender age.

“He's infatuated with his grandfather and what he does. Like most kids of his age, he's a curious George, and loves being in the workshop upstairs, looking at all the repairs," said dad Robert, from Ballyclough.

Shane, a nephew of Michael Martin Jnr, is the third generation of the Martins to work in the multi-award-winning family business.

During his 20 years of service he has won numerous awards including the Fuji Wedding Photographer of the Year.