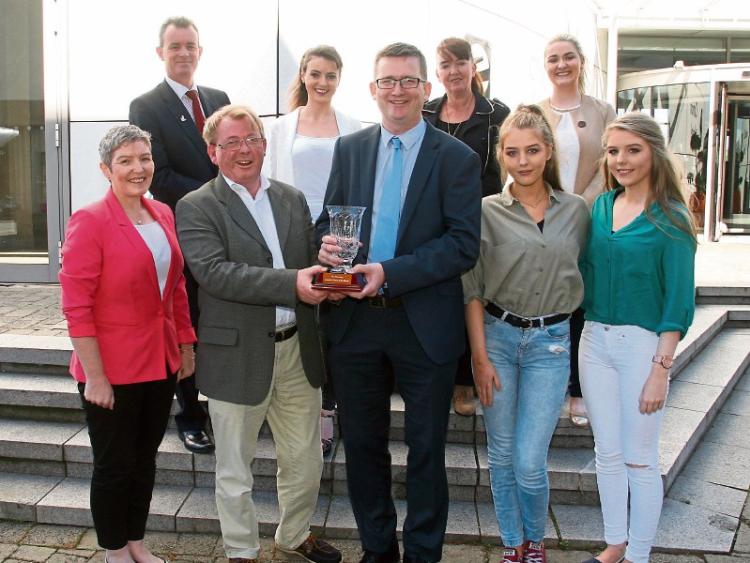 A GENEALOGIST who rallied 2,500 people to attend a re-enactment of a march by Irish Volunteers to Glenquin Castle, has been named the Limerick Person of the Month.

One of the biggest single events of the Easter Rising was re-enacted on Sunday, April 24 at Glenquin Castle in West Limerick where hundreds of people walked in the footsteps of Irish Volunteers who played a part in the struggle for independence.

The Footsteps to Freedom event involved a re-enactment of the march of 300 Irish Volunteers from across West Limerick and North Cork to Glenquin Castle 100 years ago.

“The year 1916 was, for most people, about Dublin,” explained Gerard Greaney at the award presentation this week.

“There was, in fact, a lot done outside Dublin but it was just never commemorated,” he added.

Gerard, a qualified genealogist who has a keen interest in the tracing of family history, was determined to mark the events at Glenquin Castle with a special celebration.

The mustering in 1916 was part of a wider plan to galvanise the country and strike for Irish freedom against imperialist Britain.

On the day, up to 300 volunteers, drawn from 11 Irish Volunteer sections, made their way across fields, their eyes firmly on the Glenquin landmark.

Their mission was to be part of the wider national uprising. They travelled on foot over bogs and fields and along side-roads to avoid detection. They waited for hours in Glenquin until finally the word came from Limerick that the rising had been called off.

More than 2,000 people attended the commemoration, where after a moment of reflection they enjoyed an afternoon of traditional Irish music.

“The idea was to re-enact the event. We ended up with 21 villages walking because some villages had split down through the years. The idea was to use genealogy to get as many names as possible of the original 200 to 300 and then go forward to grandnephews and grandchildren and you would say to them ‘well, your grandfather did this’. We were shocked when we ended up with 2,500 people on the side of the road.”

“We went around to all the different villages - that’s where Jane Lacey and Vera Lacey came in. The two girls also looked after the end piece with the actual celebration and food etc. They were a major part of it.”

Just over 900 people arrived at the castle after walking from 21 different villages across West Limerick and North Cork, including Abbeyfeale, Ardagh, Ashford, Broadford, Carrigkerry, Feoghanagh and Milford.

The walk was part one of the project. Part two is to commemorate it properly.

“We hope to have some form of an exhibition with the names or at least provide some kind of an index that we can use for later,” said Gerard.

“We were trying to reclaim history for the people themselves. It was totally non-political. It was a great way of remembering history,” added Gerard who is originally from Dromcollogher and is now living in Ardagh.