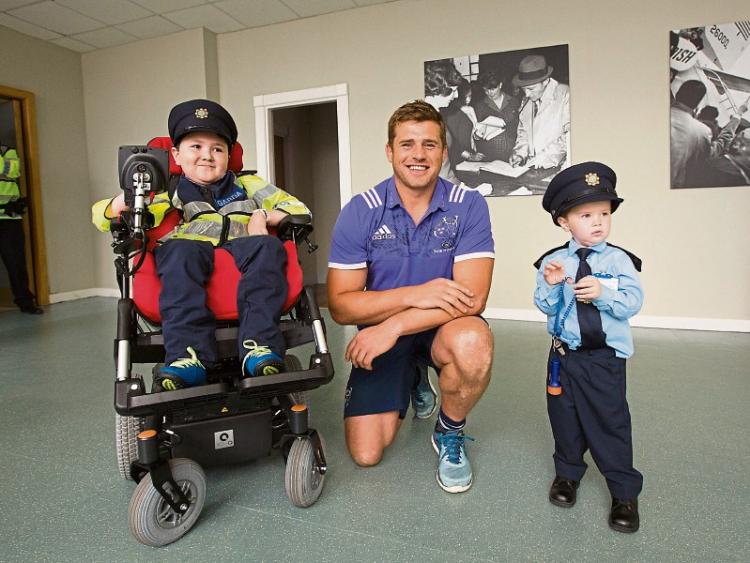 TWO young gardai got the surprise of their lives when they met Munster and Irish rugby star CJ Stander at Shannon Airport.

Newly minted gardai Jordan Perez and Ceejay McArdle, who were were detailed to the airport as part of an ongoing community initiative by the Garda Relations Bureau, were deployed to assist in security checks for the day when they met the rugby star in the VIP lounge.

Ceejay, who is undergoing intense treatment for leukaemia, last year became An Garda Siochana’s youngest ever member and this week Jordan, who is wheelchair bound with muscular dystrophy, joined him on the very special beat courtesy of Chief Supt John Kerin and Supt Brendan McDonagh.

CJ said they were "two fantastic and brave young boys”.

“They put a smile on my face certainly and I was delighted to meet them. You could meet just about anyone out here but I’m not sure I could have met any better than Ceejay and Jordan,” he said.

Ceejay, from Monaghan and Jordan, from Sixmilebridge, had the added joy of flying into Shannon on the Rescue 115 helicopter and got a special tour of the airport’s fire station as well as taking part in a special water cannon salute.

They were later hosted for lunch at the Oakwood Arms Hotel and taken on a tour of Shannon Garda Station.

“This was a very special moment for Ceejay, for Jordan but also for Shannon Airport,” said operations director Niall Maloney.

“The guys were already having a great time following a visit to our fire station but things got a whole lot better for them when they entered the VIP lounge to carry out their inspection. The last thing they would have expected was to be inspecting CJ Stander.

“He’s a super guy and was delighted to give his time for what was a great moment and one that put a smile on all our faces,” added Mr Maloney.

Garda Sgt Ann-Marie Starr, who spearheaded arrangements for the boys' special day, said: "We’ve a lot of great members of the force but it’s fair to say that Ceejay and Jordan are right up there with the best.

"They are definitely heroes and an inspiration to all of us and I think we got more out of the day than they did. They are two very special boys and we are delighted to have been able to put this event together with Shannon Airport.”