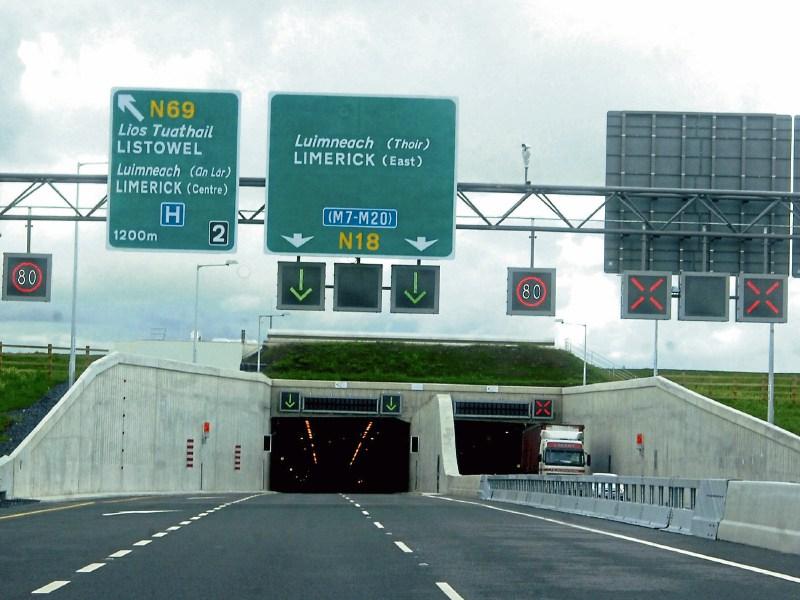 Users of the Limerick Tunnel paid around €35,000 in tolls every day last year

THE company which operates the Limerick Tunnel saw its income from tolls increase by more than 11% last year as the number of vehicles using the tunnel continues to increase.

While the number of vehicles using the tunnel remains below expectations, new figures show more than €12.6m was paid in tolls during 2015.

The 675 metre long tunnel — which connects the N7 with the N18 - opened in July 2010 following four years of construction.

Currently, motorists pay €1.90 to use the tunnel, which cost more than €660m to construct.

Figures contained in accounts filed by the operating company, Direct Route (Limerick) ltd, show that despite an average of almost €35,000 being paid in tolls every day last year, around €4.8m was paid  in “traffic guarantee payments”.

The monies were paid by Transport Infrastructure Ireland (TII) – formerly the National Roads Authority –  on behalf of the State in accordance with the PPP agreement.

The recently-filed accounts show the firm recorded a 3% drop in operating profits to €6.8m last year despite a slight increase in overall revenues.

The company received €4.8m in traffic guarantee payments from TII — formerly the National Roads Authority – a reduction of around €250,000 compared to 2014.

Traffic guarantee payments are paid when daily traffic volumes are below 23,000 vehicles.

They were put in place at the outset of the to encourage investors.

“Traffic guarantee payments have increased in line with the contract and provide a necessary contribution to the project funding,” state the company directors in the accounts.

Similar traffic guarantee payments also apply on other toll roads acound the country, which were built through a Public Private Partnership.

The operator of the Limerick Tunnel is a consortium of companies which includes Lagan, Roadbridge, Sisk Contractors, Austrian-based Strabag, AIB and Meridiam Infrastructure.

The Limerick Tunnel is due to revert to State ownership in 2041.