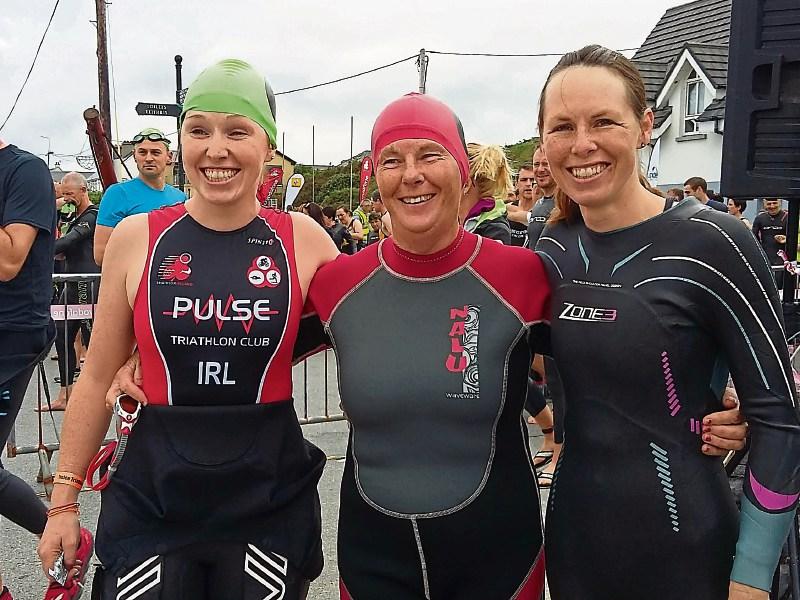 Kathleen Quain (centre) with her daughters, Siobhan and Georgina following the triathlon in Fenit

FOR her 65th birthday Kathleen Quain from Croom knew she wanted to do something quite different to mark the big day – and followed in the quick-footed steps of her daughters.

On Saturday last, Kathleen undertook her first ever triathlon, and was joined by her daughters Siobhan and Georgina as she crossed the finish line.

The Quain family took part in the Landers Sponsors Tri Kingdom Come Triathlon in Fenit, near Tralee, which attracted 400 competitors from across the count, as well as participants from Limerick, Clare and Cork.

Kathleen, who has only been in the ocean twice before Saturday’s event, didn’t let that hold her back and purchased a wetsuit especially for the occasion.

She also dusted down her bike to take part in the event having only managed to get on the bike three times before the big day.

Despite all the difficulties she undertook her first ever Try-A-Tri Triathlon which included a 250m swim, an 8km bike and a 2.5k run.

It was one of two events at Tri Kingdom Come and her daughter, Siobhan and Georgina both completed the Sprint Distance - a 750m swim, a 20k bike and a 5k run.

Kathleen was thrilled with the event and was even more delighted as race organisers presented her with a very special plaque to mark her success at the prize-giving on Saturday afternoon.

“I am not usually lost for words but I was gobsmacked,” said Kathleen. “I celebrated my 65th birthday just the week before and I thought why not join the rest of them.”

Kathleen said while she suffers from arthritis, her motto is ‘life is for living’ and ‘never sit down, just keep going’.

She said that being a farmer helps keep her fit so the triathlon was no great difficulty for her and she is still  on “cloud nine” after completing the event.

A climb up Mount Brandon is definitely on the cards, but she might also try anther triathlon.

Race Director of Tri Kingdom Come, Joanne Allman, said that participants like Kathleen are what made the event so special.

“We wanted our event to give new triathletes a chance to take part in their first ever triathlon and we had a huge number of first time triathletes and their smiles crossing that finish line made the day extra special.”