Limerick man says he will go to jail before knocking shed 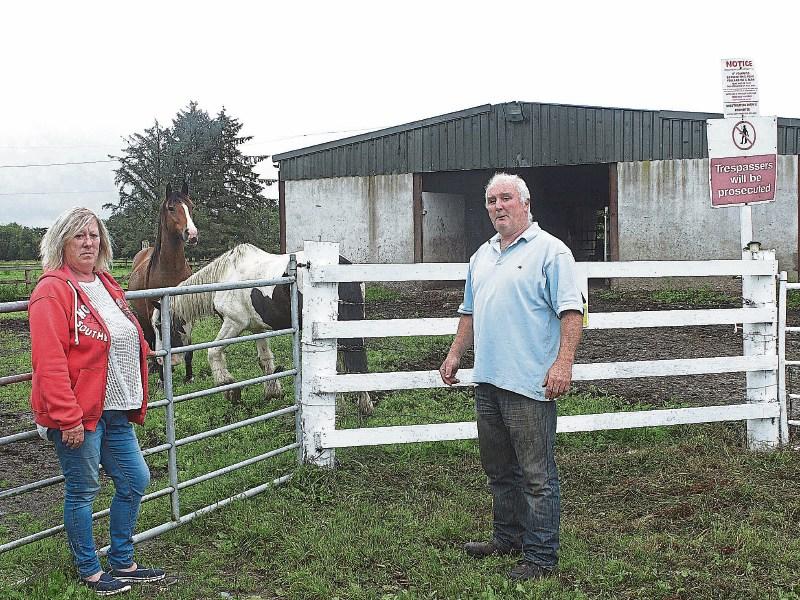 John and Joan Morgan at the shed in Portcrusha, Montpelier which was at the centre of a court case Picture: Michael Cowhey

A COUNTY Limerick man says he will go to jail before knocking his agricultural shed to the ground, as ordered by a judge.

John Morgan, of Montpelier, was prosecuted by Limerick City and County Council over not having planning permission for the structure at nearby Portcrusha.

Judge Marie Keane described the relationship between Mr Morgan and his neighbours - Conor Hourigan and Ailish Drake - as “toxic”.

John Devane, solicitor for Mr Morgan, applied for the case to be adjourned on health grounds as it was his first day back in court after a year and a half in hospital.

“I genuinely tried to make myself available. My GP advised me not to attend. I am not able to keep standing,” said Mr Devane.

Will Leahy, solicitor for the council, said he meant “no disrespect” to Mr Devane but that the matter goes back to 2004.

“It is a disagreement between neighbours and the council is stuck in the middle of it. It is an unusual criminal prosecution in that if peace broke out there would be no criminal element,” said Mr Leahy.

Judge Keane said it had been before the court on 12 separate occasions and was going ahead. Mr Devane said he had “no choice” but to come off record. Mr Morgan then represented himself.

Mr Leahy said the case was “quite straightforward” and hinges on one issue. He said under planning laws an agricultural building less than 200 sqms is exempt from requiring permission unless it is 100 metres from a house.

“Mona Lodge - where Mr Hourigan and Ms Drake live - is 65 metres from the shed. Thus it requires planning unless they give their consent. They moved into the house in 2006/2007 and Mr Hourigan, who is an architect, gave consent. Something happened between 2007 and 2010, they contacted the council and withdrew consent,” said Mr Leahy.

Michael O’Brien, planning inspector, said in 2004 the previous owner of the house “wasn’t happy” with the shed.

“We served an enforcement notice in September 2005,” said Mr O’Brien. He added that two days before the court case in 2007 they received a letter not objecting to the shed subject to a number of conditions including it must be returned to 200 sqms and height reduced.

In 2010, the Hourigans withdrew their consent and the council sent an enforcement letter to Mr Morgan to remove the “unauthorised structure within a month”. In 2011, Mr Morgan was refused planning by the council and in 2012 by An Bord Pleanala. Mr Hourigan took the stand and said one of the conditions of giving consent was that there would be horses and not cattle in the shed.

“There are no slatted units for waste. The head of our well is 20 metres from the shed. An Bord Pleanala upheld that. In 2009, it was full of cattle and obviously animal waste,” said Mr Hourigan.

Mr Morgan said he just asked for a letter of consent from Mr Hourigan. “I didn’t know about stipulations,” said Mr Morgan, who asked Mr Hourigan when did they discuss horses only?

Mr Hourigan said: “I added that condition to the letter. As far as I am concerned all matters were agreed when he asked for a letter for the council.” Mr Morgan said: “We never had a discussion about horses.”

Mr Morgan said the council are saying the case has been “put back and put back” due to him but “I uncovered Mona Lodge had no planning”. Judge Keane outlined the hearsay rule and said they were dealing with the summons and “nothing else”.

Mr Morgan said: “I had seven or eight meetings in County Hall. There are two different sets of rules - one for the Hourigans and one for my family. I engaged with the council throughout.”

Mr Leahy said this is to do with you [Mr Morgan] and your shed. “You say the council treat you differently, take it up with the ombudsman,” said Mr Leahy.

Mr Morgan said: “I went to the council to seek justice. As I produced evidence they saw injustice.”

Judge Keane reiterated that the case is about his shed which doesn’t have the consent of the Hourigans. “I put my hands up. I didn’t know about conditions. As a gesture I gave him limestone,” said Mr Morgan. Judge Keane put it to Mr Morgan that he asked for a letter for consent and didn’t read the letter? “He sent it in,” said Mr Morgan.

Judge Keane said the onus was on Mr Morgan to liaise with Mr Hourigan. “I just asked for a consensual letter. I didn’t get the letter. He sent it to the council,” said Mr Morgan.

The defendant accepted that he “never” had planning permission for his shed. “I thought I could be accommodated by the council the way Mr Hourigan was accommodated. I came here seeking justice,” said Mr Morgan. Judge Keane said only a local authority can grant planning.

Mr Leahy said the argument was between Mr Morgan and the Hourigans and asked Mr Morgan about “making peace”.

Discussions took place and later that afternoon Mr Leahy informed the judge that, “unfortunately they were not able to completely agree”.

Judge Keane was satisfied the prosecution had proven its case and ordered Mr Morgan to pay the council’s costs of €3,452. Regarding the fine, the judge mitigated it from €5,000 to €3,000 due to the “significant cost of removing the structure”. She gave Mr Morgan “one month for this structure to be removed and the site restored to a greenfield site”. Speaking after the court case, Mr Morgan said: “I will go to jail before knocking the shed. I am going to appeal it.”