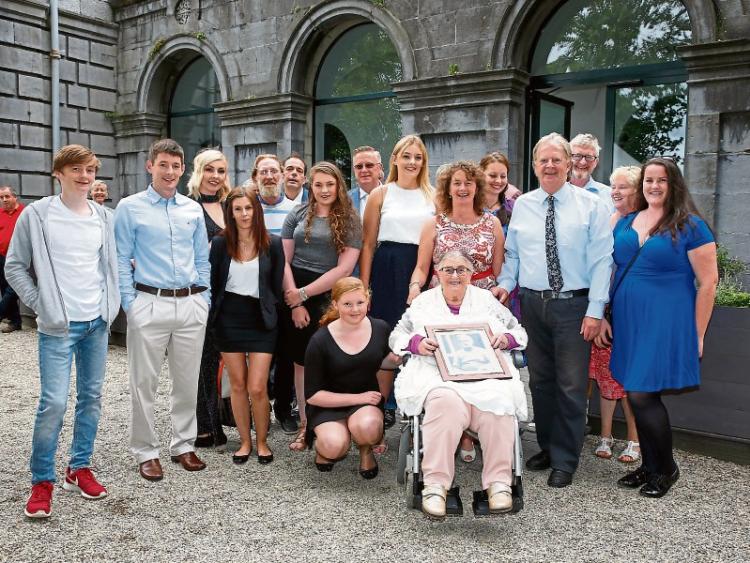 Nancy Lawless and her extended family at the launch of a new website dedicated to the archives of sailor Pat Lawless who circumnagivated the globe singlehanded in his 70s. Picture: Keith Wiseman

On July 23, 1996, 70-year-old Limerick sailor Pat Lawless was hailed as a hero after sailing single-handedly around the globe. It had taken him three years and three days to complete and was his third attempt, the first two having ended in near disaster.

Now 20 years on - and six years after his death - Pat’s extensive archive of journals, photographs, interviews, newspaper clippings and video diaries has been put online at www.patlawlesssolocircumnavigator.com.

“There was a lot of drama to the whole thing as well as the romance of it all,” his son Dan said of his late father’s exploits on the high seas.

Pat first developed his love of boats as a child when he joined Limerick Boat Club and got the opportunity to train in a sailing dinghy which the club owned. At the age of 16, he bought his first boat - a 16-foot sloop - and sailed it up and down the Shannon, in Lough Derg and around the coast of Ireland.

He continued to sail throughout his adult life, while also running a furniture making business with his brother Peter.

Then in 1986, at the age of 60, he fulfilled one of his life’s dreams by sailing across the Atlantic to Newport, Rhode Island, in a 28-foot yacht, Iniscealtra.

The following year, in 1987, aged 61, he sailed from Newport back to Limerick.

But Pat was only getting started. Two years later, at the age of 62, he set sail on his first attempt to circumnavigate the globe in a boat sponsored by the Limerick Leader as well as family and friends. However, his bid ended in near disaster after his rudder broke 1,200 miles west of Cape Town in South Africa. He drifted for 40 days, rationing himself to half a cup of water and half a tin of food per day, before finally being rescued by a Norwegian freight ship.

Undeterred, he set out again the following year on a 32-foot yacht named Loon, having secured sponsorship from the late Tony O’Mara and others. This voyage also had to be abandoned in Brazil after storm damage to the boat.

During his travels, Pat suffered various injuries at sea, including broken ribs and a hernia, at one point having to undergo surgery in Chile. “He never dwelt on it though,” Dan said of Pat’s various mishaps. “He was a tough nut.”

Following his third - and successful - circumnavigation bid, Pat wrote a 350-page autobiography based on his notes and logs. Unfortunately, it has gone missing but the family is hoping that it may yet turn up. In the meantime, anyone who is interested in finding out more about this remarkable man can now do so via the website. “At least this way you have the entire archive - 800 pages of his journal written while at sea as well as photos, logs, videos and interviews he recorded,” said Dan.

The website was launched last Friday in the Hunt Museum by Keith Wood and Mayor of Limerick Kieran O’Hanlon who, in a twist of fate, last held the office of Mayor in 1996 and was there to officially welcome Pat home after his successful circumnavigation. Pat’s old boat, Loon, was docked in the marina at the rear of the Hunt museum during the launch.