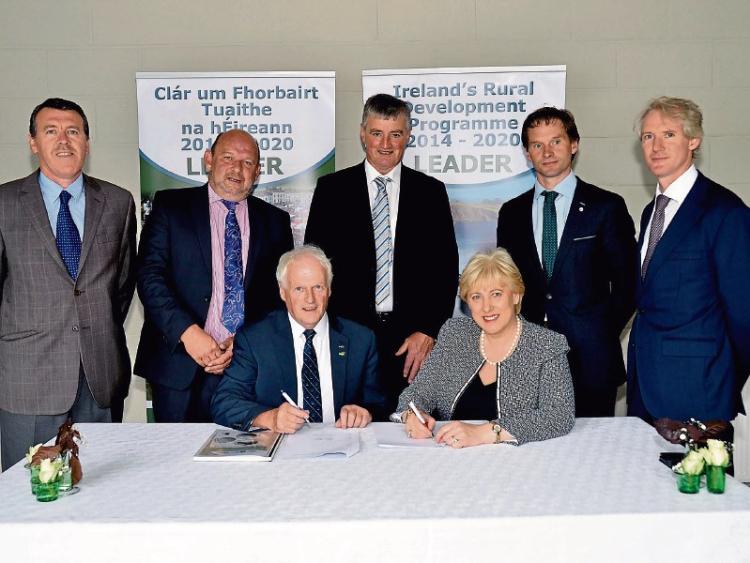 COUNTY Limerick is to get just over €9 million from the €250 million in Leader funding allotted to the whole country for the period upto 2020.

“The Leader programme will deliver some €250 million into rural towns and villages right across Ireland over the next four years. By signing the funding agreements we are unlocking €9,276,593 in vital funding for rural communities across Limerick,” said Minister Humphreys.

Chairman of the LCDC and the Cappamore-Kilmallock municipal district, Cllr Eddie Ryan said: “I would like to thank all members of the LCDC for their engagement and assistance in the process and look forward to working with them to deliver the programme for communities in County Limerick.”

He said the funding will support jobs and investment in Limerick over the next four years as the Leader programme funds projects under a diverse range of themes that include enterprise development, rural tourism, social inclusion and the environment.

The signing of the agreement cements the future of Ballyhoura and West Limerick Resources. Only two years ago concerns were expressed that they could close due to proposed changes on how local and rural development programmes are delivered.

John Walsh, then Ballyhoura chair, said: “The changes by the Government could see public bodies take over these programmes which would have serious consequences for citizens and communities across the Ballyhoura area.”

Minister Humphreys said: “I know that communities across Limerick are very eager to access this funding, for the benefit of local groups and organisations. I was very keen to ensure the funding agreements could be signed as quickly as possible so that this money can start to flow into rural Ireland. Now, the majority of funding agreements are being signed, meaning the local action groups can start receiving applications for funding.”

She said one of the great strengths of Leader is that it puts funding decisions in the hands of the communities where the money is spent - local decisions by local people.