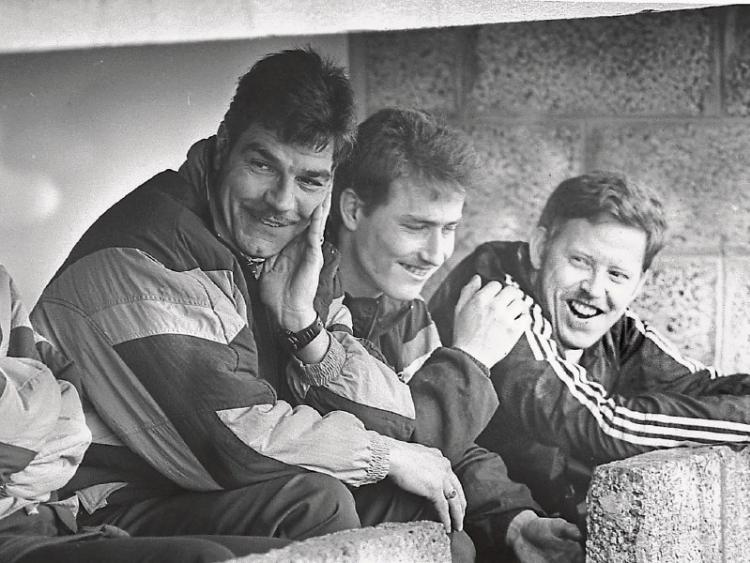 Sam Allardyce, left, in the dugout at Hogan Park in February 1992

WHEN Sam Allardyce arrived in Limerick, and was given a clapped out motor to get around, little did he think that 25 years later, he would be driving an Audi to Wembley as the new England soccer boss.

But that is exactly what has happened this week, as ‘Big Sam’, as he is affectionately known, was appointed to one of the most high profile jobs in world football.

It comes after spells in charge of Bolton Wanderers, Newcastle United, West Ham United, Sunderland, and Notts County – where he won his last major trophy, the old third division title.

But it was Shannonside where it started for Allardyce, and where he won his only other piece of silverware, the Irish first division title for Limerick FC in his first and only season at Hogan Park.

And this week, there has been an outpouring of pride at the success of the popular coach, with Mayor Kieran O’Hanlon planning to invite the 61-year-old back for a civic reception.

Marcus Tuite, who scored 40 goals from midfield for the Super Blues between 1985 and 1990, always knew ‘Big Sam’ was going places.

He said: “I played in Britain under managers like David Pleat and Ray Hartford, who worked under Kenny Dalglish at Blackburn Rovers. They would have been high-profile managers, and you could see in Sam, even though he was just a novice at the time in the management game, there was something very special about him.”

Former Luton Town man Marcus – who was famous for being the first Irish player to score in a FIFA championship – recalls Allardyce’s slightly unconventional method of managing.

“We used to go into the dressing room, and all you could see on the ceilings and the walls were these A1 size flipchart sheets. He put slogans on them like ‘Don’t lose any battle’, or ‘Together we must win the war’. He was mad for all that stuff. But he was trying to get a message across through visual aids, as well as speaking the word.”

The approach paid off, as Limerick – then chaired by Fr Joe Young – romped to the title.

Mr Allardyce left to continue his managerial career in England, a source of regret for Marcus, who believes he might have stayed with the Super Blues another season had Sam remained.

Reflecting on Big Sam, Marcus added: “He had a nice, good strong laugh abour him. He liked a laugh and a joke, and was great at giving banter, a bit of to and fro. He was very motivational, and would try and get the best out of every individual on a continuing basis. He would embrace players, put his arm around them, and bring them on when they needed a bit of help.”

Despite some scepticism from some sections, he is confident Allardyce will have the same impact on the underachieving England team, which crashed out of Euro2016 to Iceland, predicting for the first time in years, the Three Lions will be in the hunt for trophies.

Current Limerick FC chairman Pat O’Sullivan believes the Super Blues can take a lot of credit for Allardyce’s ascent to the top, saying: “You have to look at the canvas Sam was given, and it is what was on that canvas which allowed him to be so successful. He learned the skills here which stood to him everywhere.”

Pat is confident Mr Allardyce will accept the invitation to receive one of Limerick’s biggest honours, adding: “It would compound the view of the type of person he is, which seems to be very straight forward.”