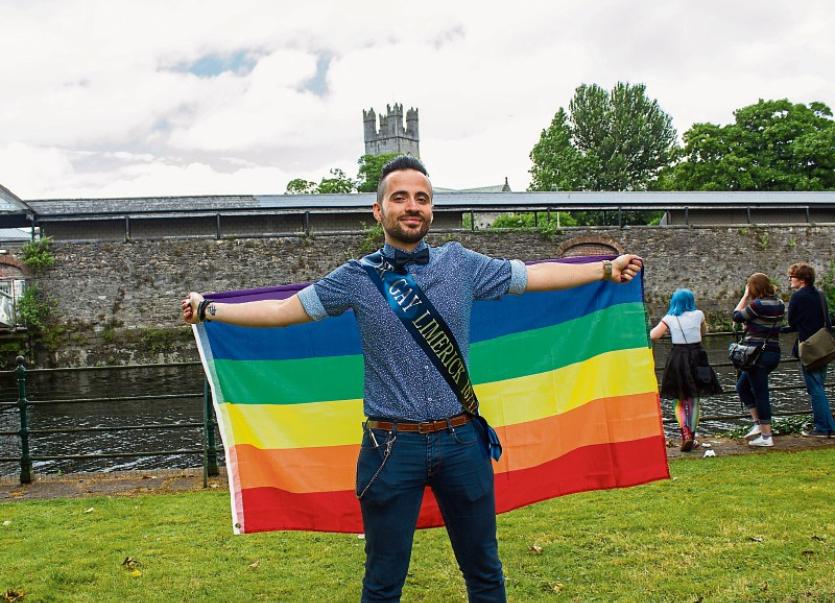 THE WINNER of Mr Gay Limerick 2016, an Italian teacher in a county Limerick school, wants to raise awareness and combat homophobic and transphobic issues across the second level education system.

A resident in Limerick for the past six years, Dr Christian G. Moretti, a teacher of Italian, Spanish and social, personal and health education (SPHE) in Colaiste Ciarain in Croom, said he has been buoyed by the support of students, parents and his colleagues at the school since winning Mr Gay Limerick.

Dr Moretti, who holds a PhD in Comparative Literature from the University of Kent, won the title earlier this month in Pery’s hotel after deciding to enter “for the craic”.

However, now that he has won he plans to use his reign to raise funds for Pieta House, the suicide prevention charity, and to highlight homophobic and transphobic issues in Limerick schools, and possibly across the country.

“I was delighted to win and want to give something back to Limerick because it has been such a good place to me. I came here for a job six years ago and Limerick is my home now. I absolutely love the school, and I love Limerick. It has given me so much in the last six years and I want to give something back to the community,” said the native of Abulia, in southern Italy, whose mother is Swiss.

The 32-year-old said bullying of gay, bisexual or transgender students in schools “is a huge issue unfortunately”, but he has an avenue to address these issues in Croom through his SPHE class.

“The response from my students has been absolutely fantastic, but unfortunately it is an issue everywhere. Students have to be made aware that using certain terms are not Okay, from an early age, and once you explain that to them they really take it on board,” he told the Limerick Leader.

“Before the competition, I explained to people online why I was entering – that I could be a teacher and Mr Gay Limerick and do it for a good cause. I received so emails and messages from parents and students saying they were so proud that I was going for it, and that they felt honoured to have me as a teacher; it was just fantastic.”

Growing up, he said he knew of Limerick mainly because it is the home of the band The Cranberries, counting himself as a huge fan,  and he is now engaged to be married to a Limerick man.

In addition to his full-time job, Dr Moretti is also a promising novelist, having just published his latest work, set in Italy and Limerick, with the prestigious Italian publishers, Edizioni Croce, which are based in Rome.

Entitled L'Attesa delle Isole' – or The Wait of the Islands - his second novel tells two intertwined stories that span 40 years. It begins with a historical portrait of the Tremiti Islands, a small archipelago in the Adriatic Sea, which was home to a penal colony that imprisoned those convicted of homosexuality prior to the Second World War.

The second story is that of Michele, who, after the death of his father, is forced to emigrate to Limerick with his mother. There he lives a double life, in hiding his love for his partner Niall.