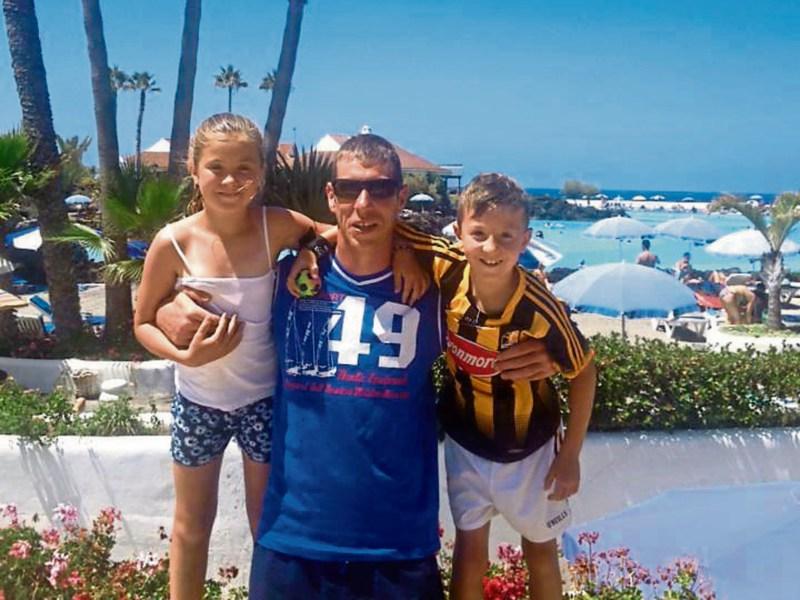 John O’Donnell with his children Kaelin, 10, and Andy, 7

A COUNTY Limerick father feared that his family would be locked out of their hotel room in Tenerife if they didn’t pay for their accommodation for a second time, following the collapse of LowCostHolidays.

John O’Donnell from Effin and his partner Aisling Mulqueen from Kilmallock, who had been enjoying the delights of the Spanish island with their two children, were left reeling on Saturday night when a phonecall came through to their bedroom informing them that the travel site had gone bust.

“It was reception saying that there was bad news that we had to pay the hotel again,” John told the Limerick Leader from Tenerife this week.

As many as 15,000 Irish holidaymakers have been hit by the sudden collapse of the online travel agent on Friday evening. Many people already overseas have to pay the full cost of their accommodation again despite having paid LowCostHolidays in full.

John and Aisling had booked the 10-day holiday for four to Puerto de la Cruz two months ago at a cost of €2,000.

“We arrived last Monday (July 11). The flights were about €1,300, the hotel was roughly around €500 and the transfers (transportation to and from the airport to the hotel) was €150,” John explained.

According to John, the hotel staff told them that they had to pay up for their accommodation again “or else you were out”.

“At reception they said we had to pay – they asked did they expect us to have a free holiday. We just told them we had it paid for already – how dare they say that to us,” said John.

“Even walking in and out of reception over the last couple of days, you wonder are they looking at you saying you have not paid, and you’re wondering if your room is going to be locked when you get back.”

Having discussed the matter, John and Aisling decided to pay over the €500 “rather than draw the aggro on ourselves”.

They were determined to enjoy the rest of the holiday with their two children Kaelin, 10 and Andy, 7.

“We were very angry but we had no other choice. It ruined our last two days. We have another four days – we’re coming home Thursday but we decided not to draw aggro on ourselves that we would pay them today,” John explained this Monday.

“It has put a dampner on it but we said we would just get on with it now for the next couple of days.”

The holiday had been John and Aisling’s first time to book with LowCostHolidays and also their first time to Tenerife as a family.

“We would have been better off in Ballybunion for the week with the weather – we would have had less hassle,” said John who explained that 10 other residents in the hotel were also affected by the collapse of the travel site.

“There was another couple from Dungarven.They were saying that there were people coming the day after it broke down and there wasn’t a hope of them being allowed in unless they paid up front.”

Customers hit by the collapse of LowCostHolidays have been informed that they can fill out claims forms for monies lost, which has been made available on the Commission for Aviation Regulation’s website.

“They are saying we will get the money back because Ireland is covered. It didn’t say how long it would take or anything though,” said John.