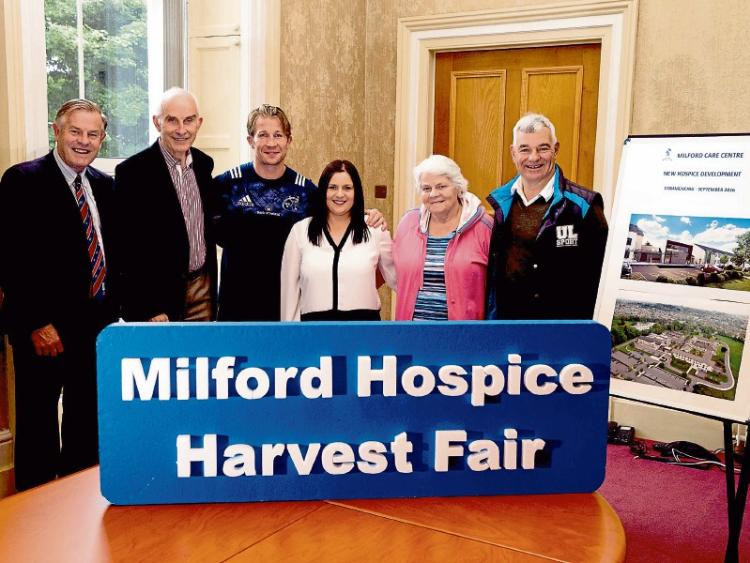 The Milford Hospice Harvest Fair – the Care Centre’s biggest annual fundraiser – returns to the UL Arena on August 14, with 20,000 people expected to attend a “bigger than ever” event.

With Milford currently working on construction of a new, state-of-the-art purpose-built 34-bed singled roomed hospice unit, the fundraiser has taken on a priority this year.

“A lot of credit goes to the staff in the Hospice Unit at Milford and the Hospice at Home Teams from across Limerick, Clare and North Tipperary, who do tremendous work in the community,” said Jerry.

“Now with the new hospice build on the horizon we must all do our bit to continue to support Milford and the services provided,” he added.

Milford CEO Pat Quinlan said funds raised from the Harvest Fair would “go towards supporting existing hospice services and the building of a new 34 bed €11 million state of the art hospice, which is expected to commence in late September”.

“All going well, the new facility is expected to be operational before the end of 2017, the year that will mark 40 years of Hospice Care at Milford.”

Mr Quinlan said that “as things stand”, the sum of €7m has been committed towards the project, with a shortfall of €4m to be raised over the next four years. Milford has applied to the HSE for a capital grant of €1.8m and is awaiting a response, he said.

Harvest Fair chairman Joe Murphy said the generous support from the people of the Mid West is “all the more important” given the fundraising context.

“Hopefully we will have as many of you as possible at the Fair on the grounds of UL for what promises to be a great day out for all,” he said.

“This year’s event will have a more traditional flavour with the return of the Books, Toys and Fancy Good stalls which could not feature in 2015 due to logistical reasons with building works taking place at the UL  Arena.

“We are looking forward to seeing the return of these popular stalls as they are a great attraction for many of our supporters and were badly missed last year. Sometimes we forget how popular everyday goods such as books and household items can be and of course it’s a way of freeing your home of once new and loved items, whilst making room for new purchases at the Fair.”