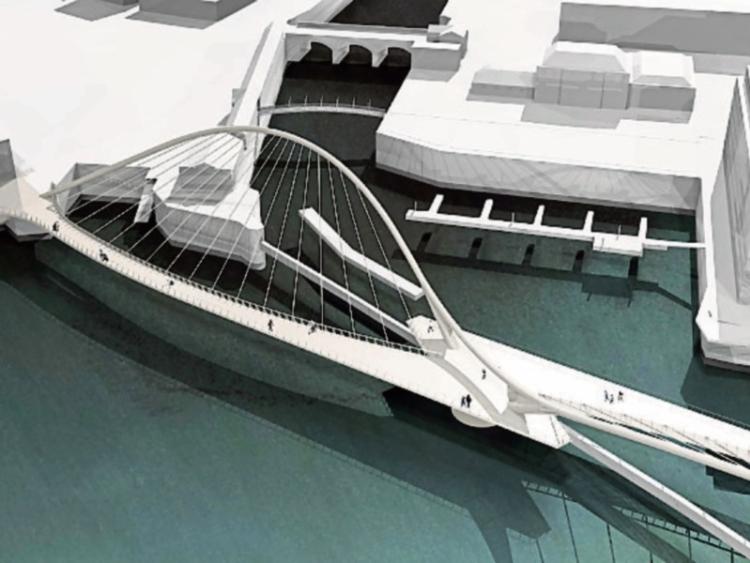 One impression for the proposed bridge, which is to be discussed today

THE controversial €18m Limerick city footbridge project will take a fresh twist later today, with the public finally asked to get involved.

At this afternoon’s full council meeting, there will be a presentation on the proposal – which would link Arthur’s Quay and the courthouse – before councillors will ask for the matter to be adjourned to allow the public have their say, the Limerick Leader has learnt.

Mayor Kieran O’Hanlon said: “this should have been done a long time ago”.

The footbridge project – which is being funded in part thanks to a €6m grant from a private donor – has divided opinion in the city, and even seen top architectural firm Healy and Partners to submit an alternative proposal.

Campaigners opposed to the bridge have expressed reservations about the impact the structure will have on the quayside view, plus there are concerns over the flow of the river, and the cost of the plans.

Mayor O’Hanlon confirmed: “We will be putting out a request for everybody to put their thoughts forward. After this, we will engage with consultants. It should have been done this way in the first place.”

Chairman of the economic committee Cllr Noel Gleeson added: “The consensus is the council needs to look for other designs”.

And councillor Cian Prendiville, who has lodged a motion calling for a “full consultation” on all of Limerick’s riverfront, added: “The decision to have a bridge seems to have come from on high, and there has been a backlash in the community. We are trying to correct that now – going back a step and having a full discussion involving ordinary people in Limerick.”

Brian Leddin, of the Footbridge Folly action group said: “If we are to have an iconic project, and if a generous benefactor is happy to give the city money surely that should come through a public forum. It should be a ‘people’s project’.”

A council spokesperson said, however, that a design team will be put in place first, before a full public consultation would happen. This, she added, is normal practice.