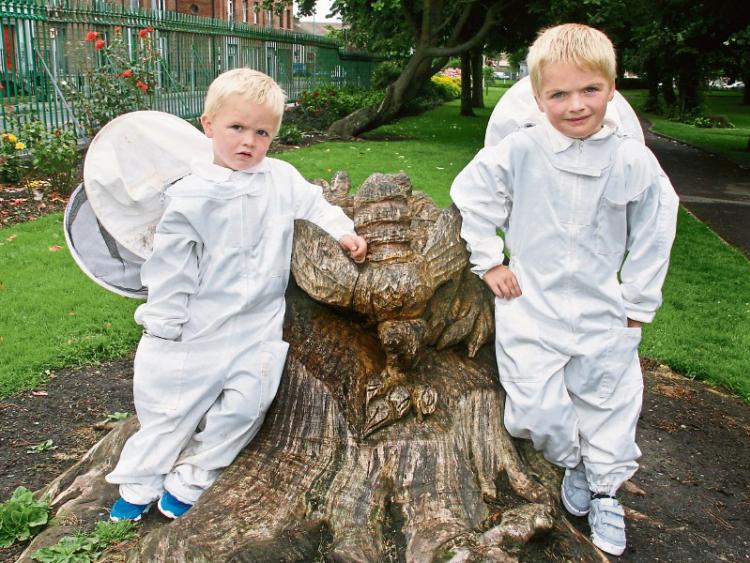 THEY may only be three and five years of age but Luke and Conor Power are already able to “wax” lyrical about the benefits of beekeeping.

Despite their tender age, the Fedamore brothers have no fear of approaching a swarm of honey bees - thanks to their grandmother Pauline Walsh from Knocklong who has introduced them to life as a beekeeper.

“Luke has been doing it for two years - for as long as I have been doing it,” explained Pauline who trained in The Organic College in Dromcollogher and got her first batch of bees three years ago.

Conor, along with Luke, regularly don their white, protective beekeeping suits and inspect the hives with Pauline.

“I’m not scared of them because I have my suit on and it stops the bees stinging. The bees make honey. We have baby chicks as well and we are getting more,” said Luke who is going into senior infants at Carnane National School.

“A bee’s full summer lifecycle is six weeks, from the hatching of the eggs to death. They spend three weeks in the hive and three weeks outside foraging. They forage to death.”

Every day, Pauline - and her grandsons - if they are with her - look in on the bees to ensure they are well.

“You look at them without opening them when you are passing them every day but then you check them once a week.”

“Checking them involves opening up the hive while wearing the suit and with a smoker. You check to see that the queen is present and laying and that they are healthy with no infections.”

According to Pauline, the queen is identifiable by her longer, slimmer body.

“She is elegant whereas the drone is big and burly with big eyes. The drones are there for cooling the hive and mating. He has no sting.”

The queen has a sting but she only uses it to sting other queen rivals that would be born at the same time as her.

“If she is born first she kills any more that are in queen cells because she doesn’t want  them to hatch out - otherwise there will be a fight.”

“You have to check them to see that they don’t swarm - swarming means the old queen will leave and take half the hive and half the honey.”

Pauline managed to fill 71 jars of honey from the two hives last year.

Beekeeping is costly business, it seems.

There are also costs to be a member of an association, to have insurance and to buy the protective suit.

Pauline, and indeed the boys, display no nerves when it comes to getting up close and personal with the bees.

“I wouldn’t be nervous but I had to walk away from a hive yesterday because they took a dislike to me,” said Pauline.

“They were dive bombing and one of them stung me in the bum. I had a half suit on. If they decide they are going to sting you, they will just keep at you.

“I had to walk well away but when I went to the next aviary and went to other bees I was fine. They can turn on anybody. It was just a little peck through the suit rather than the venom going in.”

Luke and Conor, she says, are more hungry for knowledge than they are scared of getting stung.

“We walk down without our suits and we look at them. When we are opening the hive, we have to have our suits on - they know that.

“Last week one of my lot of bees were dive bombing a bit and Conor said; ‘They are at my head’ and I said; ‘Walk up to the tunnel’. He walked up to the tunnel and he was fine.

“They don’t panic. They are generally giddy, normal children but when they are beekeeping, they are calm.  They have the chickens as well so they are getting as much nature as possible and learning how to be gentle.”