Tributes paid to 'a legend in our city, who tried to make a difference' 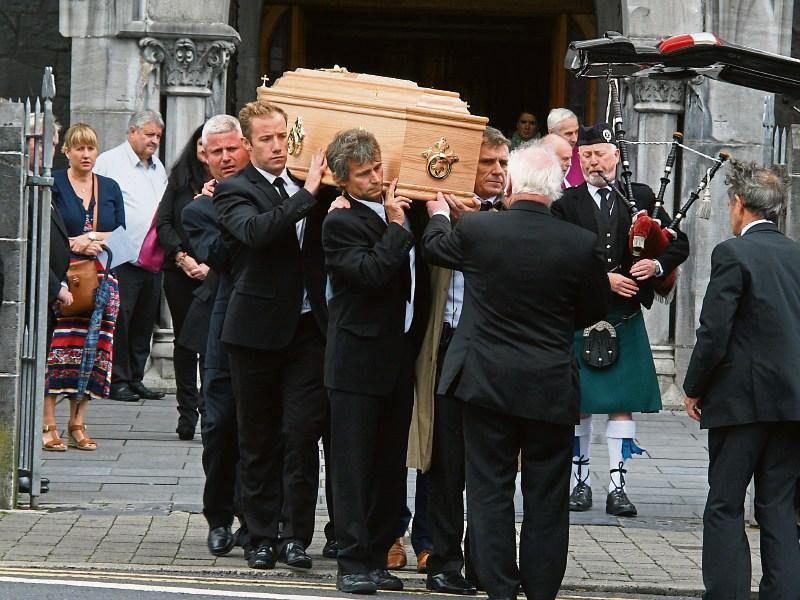 The funeral mass of local businessman Tony O’Mara heard that he was “a legend in our city”.

Hundreds of people filled the pews of St John's Cathedral this Wednesday morning to join chief celebrant Fr Joe Young in marking the “life, joy and kindness” of Tony O'Mara, who passed away last weekend.

Mr O’Mara’s coffin was covered in pink and cream flowers, with his photo happily smiling perched on top for the whole congregation to see.

Fr Young spoke highly of Mr O’Mara throughout the mass, commending him for his ”unquestionable love for those in need” and the “generosity of his heart”.

Fr Young also said, ”If there was ever a man I met in my life who spent every minute of his life trying to make a difference, it was Tony.”

Hannah carried up a pen and calculator, to represent his love for maths and numbers. The accomplished businessman that he was, he always had his figures right, and his pockets were always stained with ink, said Carol.

Josephine carried up a copy of the Sunday Business Post, which Mr O’Mara read every single Sunday from cover to cover, and a telephone, on which he had spent a lot of his time talking to potential customers.

Aisling brought up a photograph of the west coast of Clare, where Mr O’Mara often visited after reading his paper on a Sunday.

Although a tough businessman, Mr O’Mara also had a soft side. Jasmine carried up a flower, to represent his love of nature and beautiful scents.

Mr O’Mara’s sister, Anne O'Mara-Barry, read out a touching poem titled ‘Going Home’, which she wrote in memory of her brother. It mentioned his loved ones who would be welcoming him at the gates of heaven.

One line read: “If loving is sharing, you know how to share”.

Anne later went on to explain the meaning of this line, by sharing an anecdote from their childhood.

She explained how she and Tony used to share the same copy in school, and one day she got in trouble because the teacher didn’t believe that she had her homework done.

She asked the teacher to ring Tony, to prove that they shared the copy, and Tony said: ”Why did you slap my sister? She is telling the truth. We were always told to tell the truth.”

Tony, in response, simply gave his sister a hug. “Even when we were very young, that was still our Tony,” she recalled.

This was met by a round of applause from the entire congregation.

Mr Coughlan recalled a time when his own father was unwell, and he went to visit him, only to discover that his bed was empty. He later discovered that Mr O’Mara had brought him out to West Clare for the day.

This was, Mr Coughlan said, one of the many kind “gestures Tony did that no one knew anything about”.

Mr Coughlan then fondly told the story of when the pair, along with Mr O’Mara’s old colleague Ger Carmody, went to Spain for a week. They hired a car and visited Marbella, where Mr O’Mara saw a sale opportunity, and seized it.

“Tony,” he said, “never missed a business opportunity. If he saw it, he grabbed it,” and that is exactly what he did in this instance.

He thanked her for her “generosity and kindness” in the last years of Mr O’Mara’s life, and called her a “girl in a million”, to which the congregation clapped once again.

Mr Coughlan concluded by saying that Tony is waiting for us up in heaven, and he’ll meet us up there saying, “I have a great car here for you,” which brought a smile to the faces of everyone in attendence.

The congregation applauded Mr O’Mara a third and final time as his coffin was carried out of the cathedral. This was the loudest clap of all.