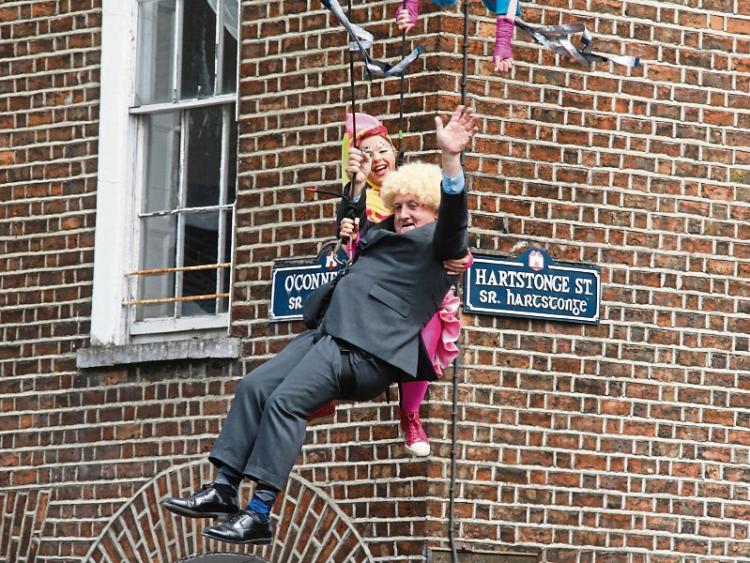 Mayor Kieran O’Hanlon waves to the crowd as he is hoisted high by the Fidget Feet. Below, Mike Fitzpatrick meets the judges and the city comes to life Pictures: Adrian Butler

THE flavours, sounds and smells of culture in all its forms filled the streets of the city to welcome the European Capital of Culture 2020 jury to Limerick.

The judges were brought on a whistle stop tour of Limerick to run the rule over the prospective bid, thought to be worth in the region of €170m to the winner.

Starting with a briefing on the sixth floor of the Strand Hotel from economic director Pat Daly and Mayor of Limerick Cllr Kieran O’Hanlon, the judges – two of the ten person panel that regulate the process, who were accompanied by a EU Commission official and a counterpart from the Department of Arts – were shown the best of Limerick.

A bus brought them to Moyross to meet Regeneration officials, before they moved to Cleeve’s Factory and a viewing of the Eva International exhibition.

There, they were greeted by huge crowds taking part in an outdoor silent disco, with the impact of the event clear to see on the faces of the judges.

Ciarda Tobin, a volunteer who co-ordinated the event, met with the judges, who were being guided by 2020 bid director Mike Fitzpatrick and deputy director Sheila Deegan. She explained: “We were just talking about young people, artists and organisations for young people in Limerick, dancers, choirs, film, theatre, orchestra, the hub, that they are all working together and actually that there is a really vibrant youth arts scene in Limerick. 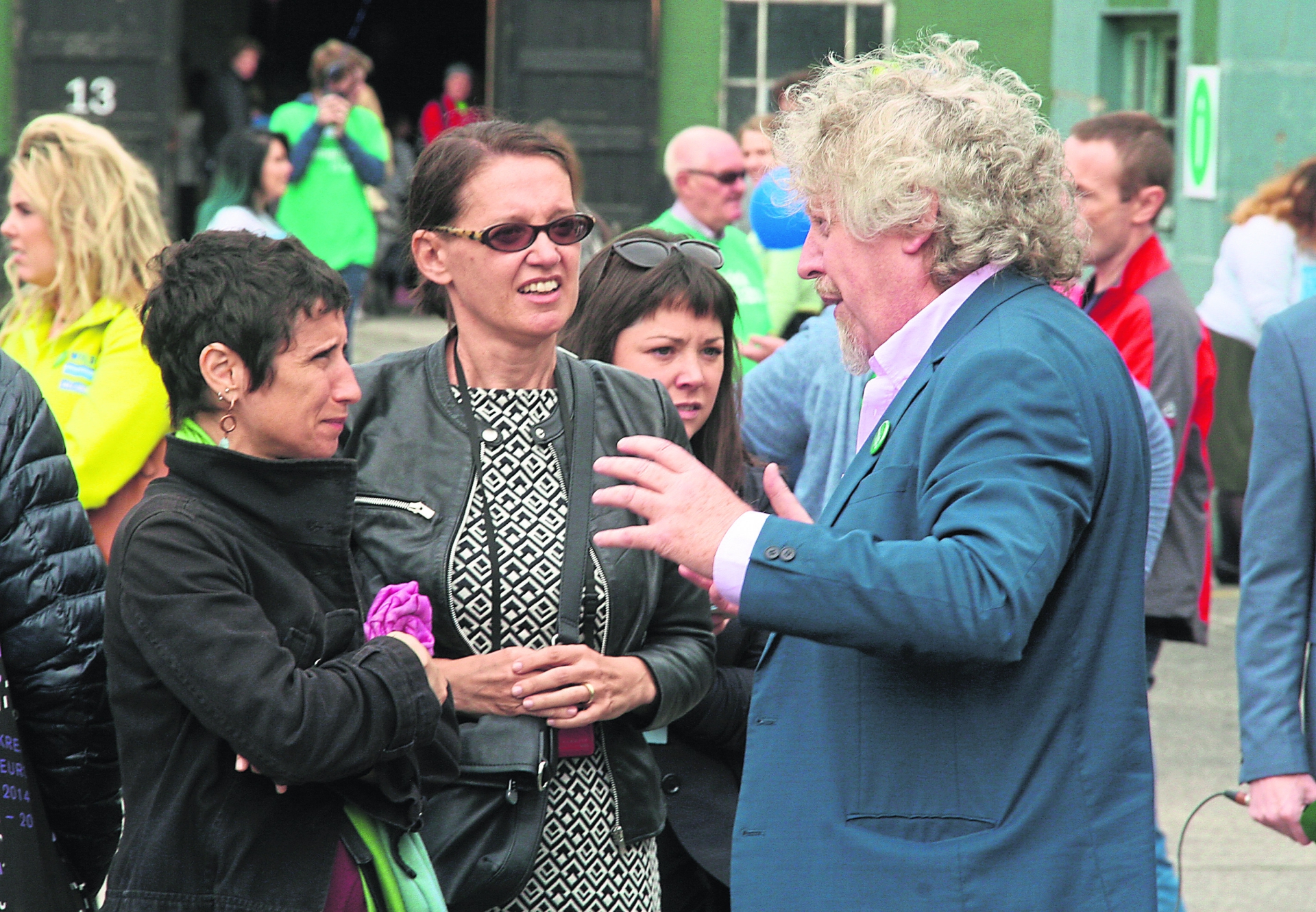 At The Crescent, several blocks of the city were closed off from midday and the beating heart of the festivities took place, with the returning Culture & Chips festival the centrepiece.

The Fidget Feet aerial dance company performed on a huge crane, while oversized furniture and balloons entertained the massive crowd that came out. 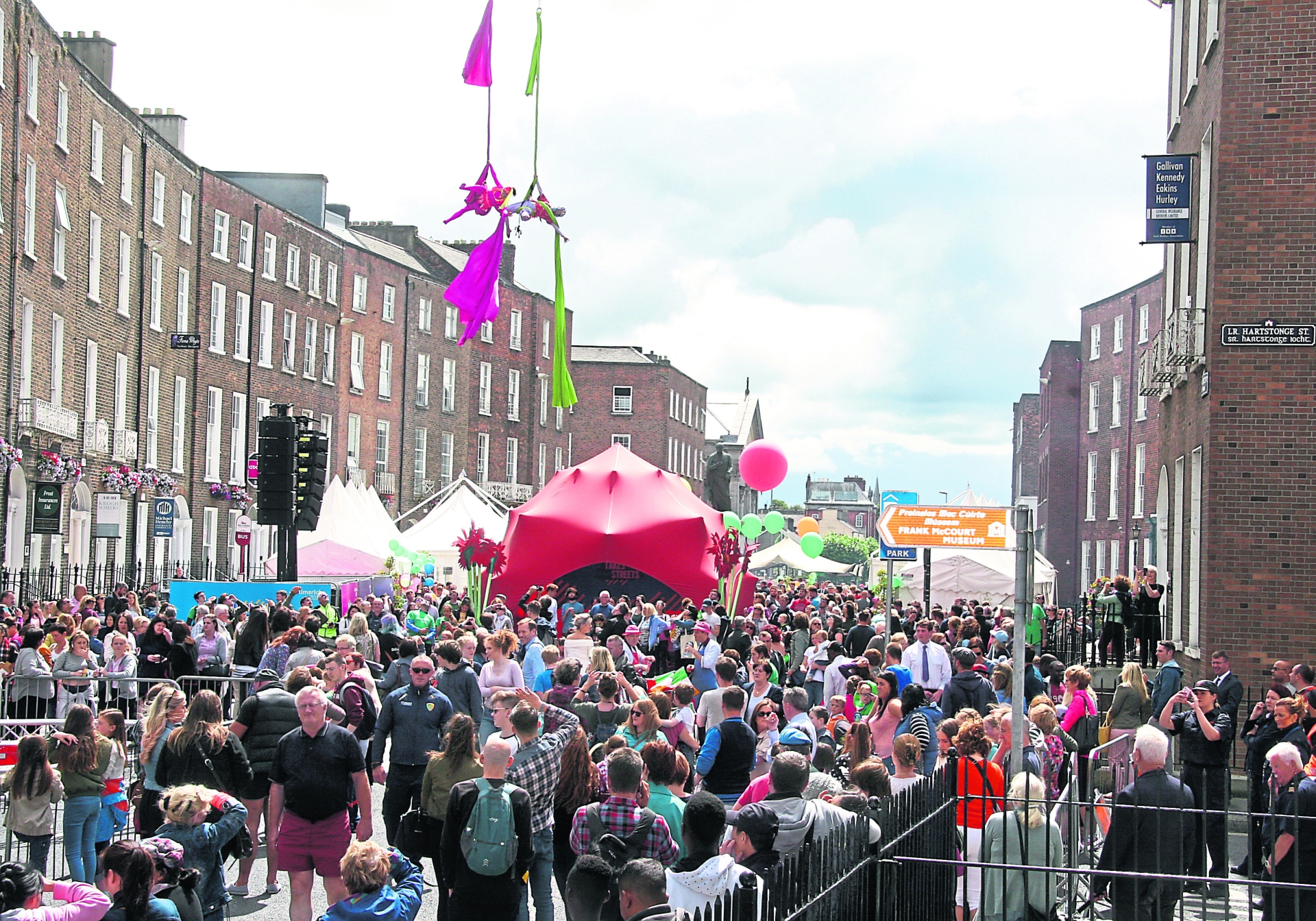 Mayor O’Hanlon braved the crane with Fidget Feet and said that the street party showed “the best side of Limerick and we are really putting our best foot forward today.

“The sun is shining and Limerick is looking beautiful. Today is a celebration of Limerick, that is what it is about.”

A host of other events also took place around the city, at the Hunt Museum, Ormston House, the Urban Garden and the Street Food market on the boardwalk at Harvey’s Quay, while musicians from Music Generation busked on the street for several hours in the afternoon.

Helen O'Donnell said that the "garden was packed" at the Hunt Museum.

"We dished out about 750 ice creams to kids, I don’t know how many kids turned up! But anyhow it was a fabulous atmosphere and the garden looks great. There was jazz in the garden and other musicians - it was just super," she said.

The Rubberbandits shared a post about artist John Shinnors selling a painting to a daring young boy for €10 at the Hunt event.

Limerick's 2020 bid team will make a presentation to the full 10 person jury on Thursday, with the winning bid to be announced on Friday.

- For move coverage of the judges' visit, see today's Limerick Leader tabloid and the weekend editions of the broadsheet