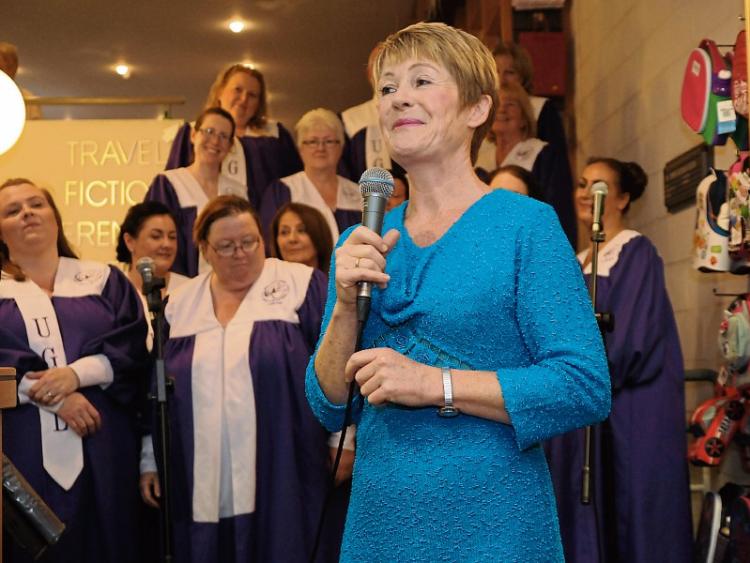 Author Roisin Meaney speaking at the launch of her latest book, The Reunion, in O’Mahony’s on O’Connell Street

THIRTEEN is a lucky number for Limerick bestselling author Roisin Meaney who has signed another three-book deal with publishers Hachette.

The Listowel born writer launched her latest book, the thirteenth to date, entitled The Reunion, at a well attended evening in O’Mahony’s book store.

She has now signed another three-book deal with Hachette Books Ireland, and seen her work translated into Russian, bringing her prolific writings to a new audience. Three of her books are on sale in Australia, and she admits she’s “dying to see the covers” they put on her works in Russia – Two Fridays in April, The Things We Do for Love and Something in Common. And The Reunion is already at number five in the bestsellers’ list.

“Who would have thought in 2014 when The Daisy Picker came out [her first book] that I’d be sitting here talking about book number 13? I certainly didn’t. I’m amazed that I’m still getting launches. I thought I had used my quota up about six books ago, but thankfully they are still going,” she told the Limerick Leader.

The Reunion is a stand-alone book, in that it’s a departure from the last three connected books set on an island, and was inspired when she attended the Limerick School Project’s 25th anniversary celebrations last year, where she had taught for the last 11 years of her teaching career.

“I went along, although I generally avoid reunions because I’m hopeless for remembering people’s names, and I’d only be apologising all night. But this one, I thought, was different, and in the course of the evening one parent remarked ‘Now, this would be a good theme for a book – a reunion’. It kind of stuck in my mind, and I thought I’d try it out.”

It proved a successful format, with the first half of the book focusing on their lives 20 years ago, and the latter half concentrating on the weeks leading up to their reunion.

While she has finished writing The Reunion since April, she has already begun writing her 14th work, which focuses on a 50-something widow. She is now some 3,000 words in. “Only another 97,000 to go,” she joked, with an upcoming sojourn in Capri expected to provide more inspiration to fill those blank pages.Roisin will be hosting a book-themed event in Gallagher's Seafood Restaurant, in Bunratty on Saturday, July 16 at 2pm and all are welcome to attend. See page 30 for more

There will also be an event in Newcastle West bookstore on July 22 at 5pm, and Roisin’s readings for children in the City Library will return in September.

The readings will be held on the first Saturday of the month from 11.30-12noon.