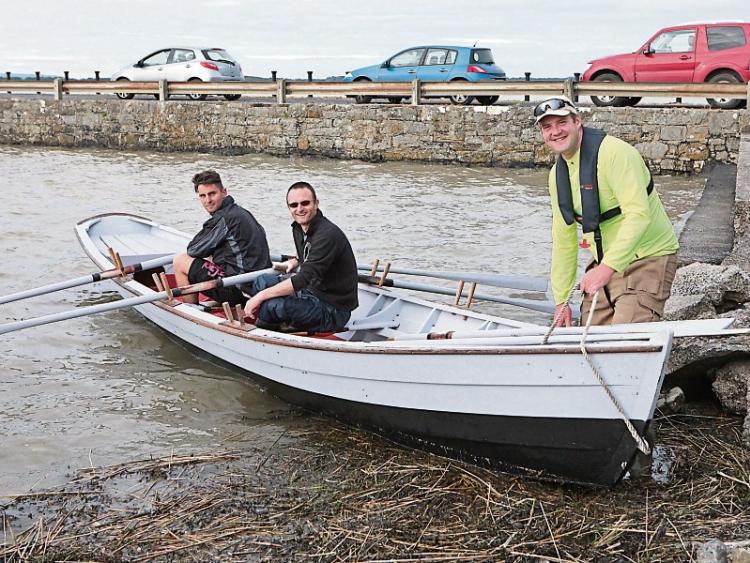 Ciaran Ryan, Tom McMahon and Cllr Emmett O’Brien test the waters at Ringmoylan in advance of the Gandelow Regatta

THE glory days of the gandelow, when hundreds of people used the flat-bottomed boat for fishing or cutting reeds along the Shannon, may not return. But enough people are passionate about this uniquely Shannon river craft, to ensure it does indeed have a future.

Many of these people have a historical tie with the gandelow and are descendants of  the fishermen, the lighthouse keepers and the reed cutters who made their living along the Shannon in days gone by.  Others are simply passionate about boats.

Now, the big gathering of gandelows which is planned for  Ringmoylan Pier, Pallaskenry, on Saturday week, July 16,   is aimed at furthering promoting interest in this unique boat.

Independent councillor Emmett O’Brien is one of those behind the Gandelow Regatta at Ringmoylan and traces his own passion for the boat back to his fisherman grandfather. He is also currently restoring his own gandelow, acquired in the 1980s by his father, and hopes to have it on the water at Ringmoylan on July 16.

“The boats are really beautiful. They just glide along the water,” Cllr O’Brien said. They are flat-bottomed boats with a very shallow draught which can easily move across or be moored in the mud, he explained, making them uniquely useful along the Shannon.

The idea for a regatta, Cllr O’Brien added, has been germinating over the past year and a half, steadily gaining traction  with former fishermen and gandalow owners.

“This will be a formal regatta, with a mixed crew race and a Masters race,” he explained.

They hope, he said, to have at least eight boats  in the races and teams are expected from Ringmoylan itself, from Askeaton, Clarina, Coonagh, Clarecastle and Limerick.

“There will be a semi-final and a final and each crew will have three men on board,” he added.

The mixed race will see crew names picked out of a hat while the Masters Race is expected to text skill and challenge local pride.

Among the boats taking part will be four gandelows hand-built at the Ilen School and Network for Wooden Boat Building at Roxboro, which has played a pivotal part in reviving interest in the gandelow and in preserving it.

The Gandelow Regatta will also give locals at Ringmoylan the opportunity to show off the voluntary work they have undertaken over the past 18 months.

The pier at Ringmoylan, Cllr O’Brien explained,  had fallen into disrepair and was not being adequately maintained but last year and again this year, a local group has gotten together and carried out a lot of work, cutting trees, trimming hedges, weeding, building walls, painting  and putting up gates.

“It is looking really great,” he said, adding that their hope is to get people coming back to Ringmoylan. “The whole idea is to bring a bit of life back to Ringmoylan and regenerate it,” said the councillor who lives locally.

The group also wants to put a rescue slipway in and this proposal is currently going through the planning process.

Any and all gandelows and their owners will be welcome to come along to Ringmoylan for 3pm on Saturday, July 16. And there will be a warm welcome for all spectators at an event which promises to spark old memories and create new ones.