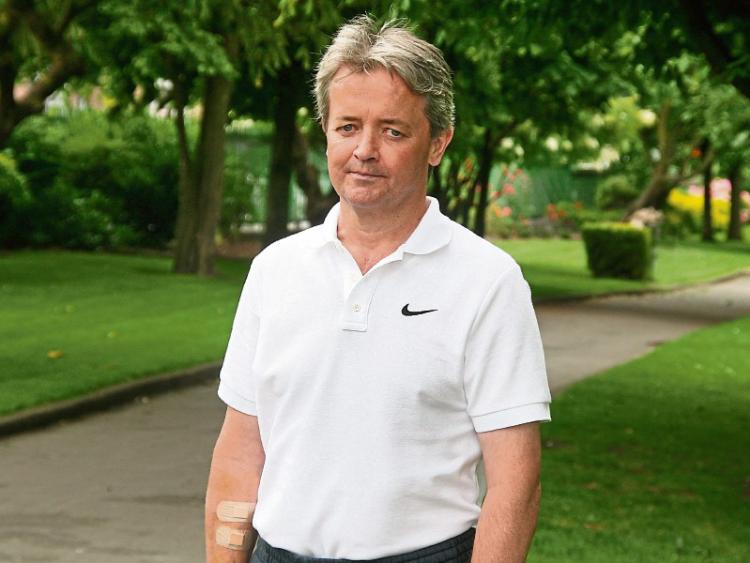 Back from the brink: Johnny Mulligan Picture: Adrian Butler

AT 9.30 one morning in October 2014 Johnny Mulligan went to the doctor, complaining of a severe headache.

By that afternoon he was on an operating table in the University Hospital in Limerick, after a catscan showed his headache was actually an aneurysm.

He missed out on Christmas with his young children – Evan, now 12, and Katie, eight – while his partner of 14 years, Joan Fitzgibbon, a midwife from Dromcollogher, attended at his bedside each and every day, and whispered encouragement and prayers in his ear.

Lucky to be alive, the Janesboro father-of-two, who now lives in Corbally, was referred to be doctors as ‘Lazarus’, a man on the brink of death, restored miraculously to life.

After his aneurysm, Johnny suffered a stroke, fell into a coma, suffered two internal bleeds and a perforated bowel, and was later diagnosed with kidney disease. In all he spent over 10 months in hospital, and lost six stone.

He now undergoes renal dialysis three times a week, for five hours at a time, and will do so for the rest of his life.

Johnny has decided to speak out now about his condition to raise funds for the dialysis unit in UHL, through an upcoming golf classic in Ballyneety, and to raise awareness of the work that they do in that unit.

“I never knew what dialysis was until it came to my doorstep. The unit is going 24/7 in the hospital, and people are travelling there from all over the Mid-West. I call the staff there my dialysis angels.

“The care of the staff in these wards was really second to none. They couldn’t do enough for me or my family. They were people who really deserve credit, especially Dr Michelle Gaffney and Liam Casserly. Only for them I wouldn’t be here.”

Prior to the day that changed his life, Johnny was a self-employed in the glazing business, taking on as much work as he could, and employing extra staff during the boom.

Now, he’s out of work, and due to his self-employed status he is not entitled by the State to any benefits.

“I can’t receive the disability allowance, can’t get social welfare. I haven’t received a cent off the Government in the two years since this happened. All along, I paid my taxes, employed people when I could. Before we had two wages to help pay a mortgage. Now Joan works 12-hour shifts to keep the house going. She has been my rock, a pillar of strength.

“If having an aneurysm, a stroke and kidney failure isn’t a disability, then what is?”

The enduring health effects of the condition have also taken their toll mentally, and socially. The Irish Kidney Association has provided some assistance in helping him to talk to professionals about the impact this has had on his life, and his worries for the future.

Johnny doesn’t know what his long-term prognosis is, apart from that he isn’t a suitable candidate for a kidney transplant.

“Some people can’t get a transplant,” he laments.

“It isn’t like sticking a memory card into a computer. There are kids who need kidney donations, and unfortunately it’s too late for me, but not too late for them if people carried a donor card.

The physical impact saw his weight drop from over 13 stone, down to seven, and he has now restabilised to 10 stone, whilst maintaining a low-salt, diary free diet due to the impact it could have on his heart. He is also on four blood pressure tablets a day.

Fluids are restricted to a strict one litre a day. Before his life changed, he would enjoy a few pints after work; now, he’ll order a bottle and maybe take just a few sips, for the sake of having something in front of him at the bar.

However, he is determined to maintain a ‘glass half full’ outlook on life, and take it one day at a time.

“There were of course days when I was pissed off. But when your eight year-old daughter says ‘Daddy, get up and do your exercise [physio], or your children hold your hand to make sure you don’t fall – that will spur any man on.”

“My message would be to take every day as it comes and never hold a grudge. I have no bitterness because I can’t reverse this, and there’s no point in being cross. I had 50 years of a good life.”

What he has gone through has shown him the depths of generosity and goodwill in others – a neighbour calling over to cut his grass, a friend coming to his home to cut hair, another calling to bring his son to soccer practice – and all the things a man wants to be able to do for himself and his family.

Joan’s colleagues in the labour ward in the Maternity hospital in Limerick covered most of her shifts that Christmas “when we were in dire straits”, while her sister Eileen Reid travelled back from Australia, shortly after moving there with her family, to help care for her sister and their children.

“My life has changed dramatically. Mentally I was so used to having money and providing for my family. All I want to do is see my kids grow up, get married and walk my daughter up the aisle. We could all lay down and die, but it’s harder to fight and I have to fight.”

-Donations to the Dialysis Equipment Hospital, University Hospital, Limerick, can be made out in that name, and sent to Johnny Mulligan, 6 Riverdale, Westbury, Corbally. He wished to thank their many sponsors to date including Paddy Kelly of Charlie Malone’s bar, Wolfe Tone Street, Dave Hickey of South’s bar, and Anthony O’Dwyer of O’Dwyers, and many others who has assisted with the fund.