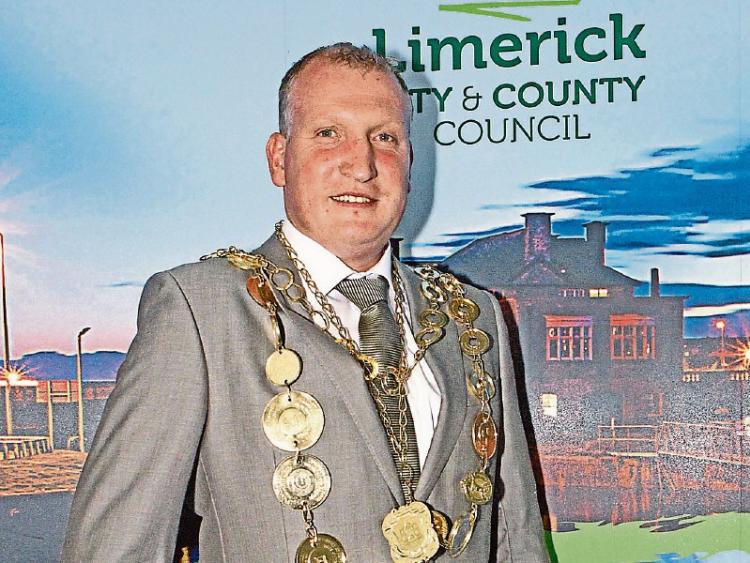 'I can safely say it has been the best year of my life': Liam Galvin

LIMERICK’s outgoing first citizen Liam Galvin says his year as mayor has been a “rollercoaster”.

“But I can safely say it has been the best year of my life,” he added.

After more than a decade in local politics, the Abbeyfeale man was elected the second Mayor of Limerick City and County.

And through this role, the man from West Limerick admits he has developed a new perspective on the city centre.

“I really got to know Limerick city way more than how I knew, as a guy coming in shopping or to watch sport. It is a beautiful, beautiful city, and I don’t think people realise it,” he says looking out over the Curragower Falls from his office in City Hall.

The Fine Gael councillor was Limerick’s first citizens as Ireland stopped to remember the events of 1916 and the formation of the state.

He represented Limerick at the General Post Office (GPO) on Easter Sunday in Dublin, and played a huge part in local events.

“The 1916 commemoration events were spectacular. I would like to say to Damien Brady and his staff here, the way they carried out the business was fantastic. I want to pay tribute to the councillors too. They were incredible. It wasn’t politicised. I was chairman of the organising committee, and everything went smoothly,” he said.

One of his fondest memories was the opening of commemorative gardens in the council’s offices at Rathkeale, Kilmallock, Newcastle West and the city centre, plus the laying of wreaths at Sarsfield Barracks, and the unveiling of the Con Colbert statue in Castlemahon.

Elsewhere, Mayor Galvin and his wife Catriona had the honour of travelling to Áras an Uachtaráin to meet President Michael D Higgins and his wife Sabina, as part of a visit by the German ambassador.

“They are the most amazing couple I have ever met,” he says enthusiastically, “Sabina is a lady if I may use the word. It is incredible she has the energy to keep going on all these years. Michael D will go down as being one of the best presidents this country has ever had. He is a very well educated man, the way he can transfer from Irish to English and English to Irish. He is the most interesting person I have ever met, and I can say that safely.”

One other highlight of a busy year the mayor identified – albeit a sombre one – was the charity concert held to mark the 20th anniversary of Det Gda Jerry McCabe’s tragic passing.

Speaking of the event at the University Concert Hall, Mayor Galvin said: “It was a special occasion. It was great to see the public and various communities getting together for it, albeit the fact it was a sad event.”

On the subject of the workload of a first citizen, Mayor Liam Galvin has said there were days he did not see his wife, often starting work at seven o’clock in the morning, and not finishing until 11pm.

To illustrate this, he shows me 14 pages, detailing 300 events he has been asked to attend.

His farming business in Ballaugh, Abbeyfeale, has been kept on the road with the support of his parents.

On this basis, he has called for more resources for the job to be looked at.

“There have been some long days,” the mayor says, “There is an old saying that you cannot be in the bog and the meadow at the same time. If you are asked to meetings or functions, and if you are missing them, it is a problem. We have to have an attendance record. You cannot be above in Dublin at a 1916 commemoration event, and be at a meeting at the same time.”

One of the subjects which keeps rearing its head is the fact Limerick has two mayors – Cllr Galvin, and Fianna Fail’s metropolitan district mayor Jerry O’Dea.

The former wants the latter’s position looked at, saying: “There isn’t a day in the week where I do not answer the question, are you the big mayor or the small mayor? Are you the real mayor or the other mayor? It is no disrespect to the metropolitan mayor. But I firmly believe there should be just one mayor for the local authority. The city and county has a population of just under 200,000 people. I think one mayor is sufficient.”

On Monday afternoon, it will be veteran metropolitan councillor Kieran O’Hanlon who will be donning the mayoral chain of office, as the pendulum of power swings back to Fianna Fail.

Asked what advice he would give to his successor, Mayor Galvin said: “Respect is one of the most important things. You have to show respect, you have to be apolitical, and listen to the employees of the council, the executive of the council or the public.”

He also recommended the City East councillor sets aside 12 months “to give 100% attention to the mayoralty.”

”You are the front face of everything that is going on. And you have to carry the flag for Limerick,” Mayor Galvin concluded.