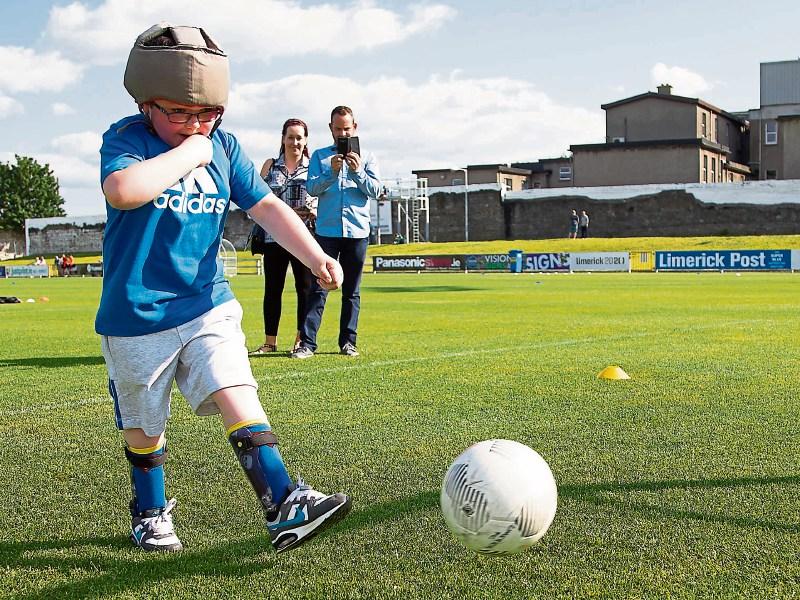 Jack tries the Markets Field pitch out for size, watched by his proud parents JJ and Amelia Picture: Conor Wyse

LIMERICK FC has given a brave little boy who has survived a series of health battles a day to remember.

Young Jack Stokes, 10, relies on leg supports to walk and has to wear a helmet after contracting meningitis, hydrocephalus and cerebral palsy at an early age.

In the first decade of his life, he has been in and out of Temple Street Children’s Hospital, and has lost the use of his left eye due to pressures brought about by his conditions.

Upon hearing of the youngster’s dream to be a soccer mascot, the Super Blues were more than happy to step in, and he walked out with the team ahead of their 2-2 draw against Drogheda United at the Markets Field.

“I love soccer, and I had a really good time,” Jack smiled after walking out at the stadium.

Asked who his favourite Limerick player is, he enthused: “I like them all!”

His mother Amelia – who lives with husband JJ and their only son outside Thurles – said Jack has had to endure 17 hospital operations in his short life.

“He could be fine one minute, and then in intense pain the next. We are constantly on a knife-edge. But he is always in great form. He loves everything, all sports, soccer.

“He loves meeting new people too. He is never in bad form,” Amelia said, “Even when he is up in hospital, he is smiling.”

Jack had a shunt fitted to his head when he was aged just four, but in February this year, his body rejected the support it was giving, leaving doctors perplexed.

Amazingly, a shunt developed over 30 years ago is appearing to provide the support the youngster requires. Amelia says it is difficult, as a parent, to see their only son in hospital.

“There is nothing you can do when you are seeing him go through all the operations. You have to realise he is in good hands, but you are just left hoping.

“Sometimes it is the not knowing which is the scary thing,” she said. “When the doctors do not know, and they are panicking and do not know what to do next”.

Due to Jack’s conditions, Amelia has had to give up a full time job, working three days a week in a local nursing home, while her husband JJ works as a bricklayer. Earlier this year, Jack met his musical hero, country star Nathan Carter.