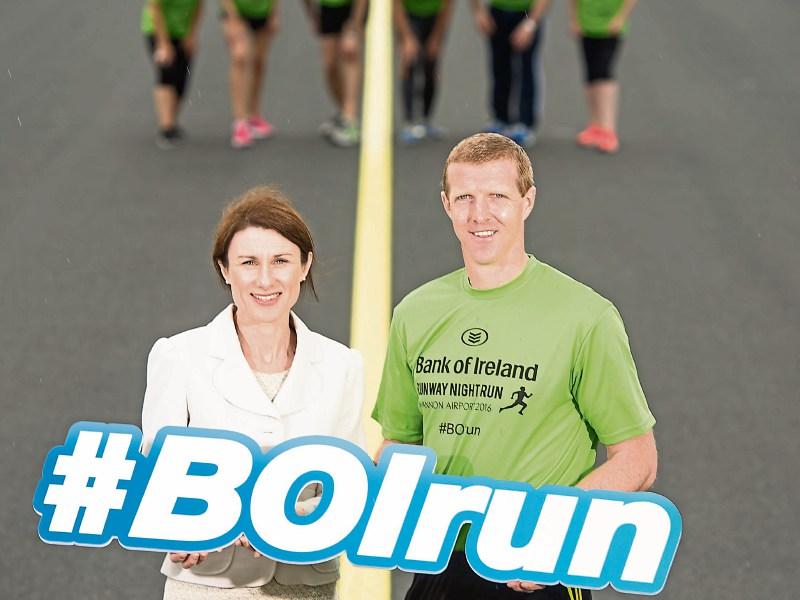 A NEW corporate challenge is driving interest in the Bank of Ireland Runway Run at Shannon Airport, which returns ‘bigger and better’ than ever later this month.

A total of 2,500 runners and walkers will take to the tape – double the number from the inaugural year in 2014 – for the June 17 event at Shannon, with a new new company challenge added this year to drum interest from the business community.

“We’ve had two great years so far but this year’s event will be the best yet. It’s bigger as we have 500 more places than last year and it’s longer as we have a 7.5km run as well as a 5km run,” said Shannon Airport Operations Director Niall Maloney of the event, launched recently by Kilkenny hurling legend and current Bank of Ireland Finance Sales Manager Henry Shefflin.

“We have had great interest so far and would advise people who want to be with us on the night for what is a really novel event to book their place as soon as possible to avoid being disappointed,” added Mr Maloney.

Proceeds from the event this year will go to the designated charities of Shannon Group, the airport’s parent company. They are Irish Children’s Arthritis Network (iCan) and Abalta Special School for students with autism in Galway.

Companies are permitted to enter up to 10 employees in the competition with the times of their top five  – must be a minimum of two male and female times – accumulated into an overall time, with the winning team to be presented with a crystal trophy and discounted shopping night fin Shannon Duty Free See www.shannonairport.ie for more.