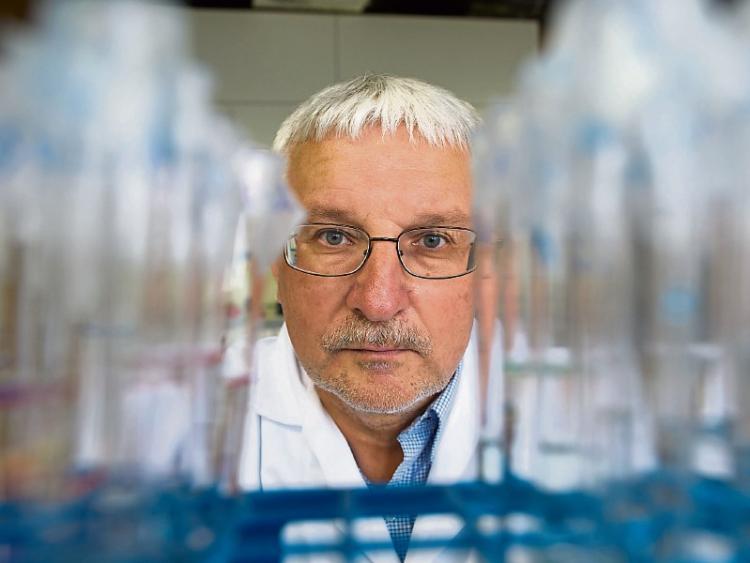 Professor Michael Zaworotko, UL, who led the team in developing this new material

SCIENTISTS at UL have developed a new sponge-like material that could help in the fight against pollution.

The researchers, part of an international team, have helped to devise a new method to purify polluting gases using the material that could lead to “reductions in environmentally harmful emissions, as well as a reduction in energy consumption globally”.

The UL team, led by Professor Michael Zaworotko, SFI Research Professor and Bernal Chair of Crystal Engineering, and Dr Kai-Jie Chen, post-doctoral researcher, found that a sieve-like structure, SIFSIX-2-Cu-i, can act like a sponge, mopping up acetylene - a colourless gas made of carbon and hydrogen.

The duo had thought that the material could work as a sieve but unexpectedly discovered that it behaves more like a sponge. Professor Zaworotko said that “in a way this was a glorious failure, where the outcome was so much better than expected”.

Collaboration and pooling of knowledge with other scientists in institutions in the US and in China led to the development of a material capable of soaking up acetylene during the production of ethylene, he explained. Ethylene is widely used in a huge variety of applications, including the ripening of fruit and the manufacture of plastics such as polythene.

The team says their new invention offers a more environmentally-friendly, cost-effective way to purify ethylene, the most intensively produced organic chemical in the world. The same approaches could also work for purification of other substances like carbon and water, they say.

As a result, if the processes currently used were to be replaced with more energy-efficient technologies like these sponges, the US alone could save 100 million tonnes of carbon dioxide emissions and US$4 billion in energy costs annually, the team estimates.

“We pride ourselves on a reputation for delivering translational research that makes an impact on industry, society and the wider community,” said Prof Edmond Magner, Dean of Faculty of Science and Engineering at UL.

“This research, which has been supported by Science Foundation Ireland, is a prime example of how knowledge and expertise developed at UL has presented a real solution to a very real challenge in a traditional industry that has impact far beyond our shores.”