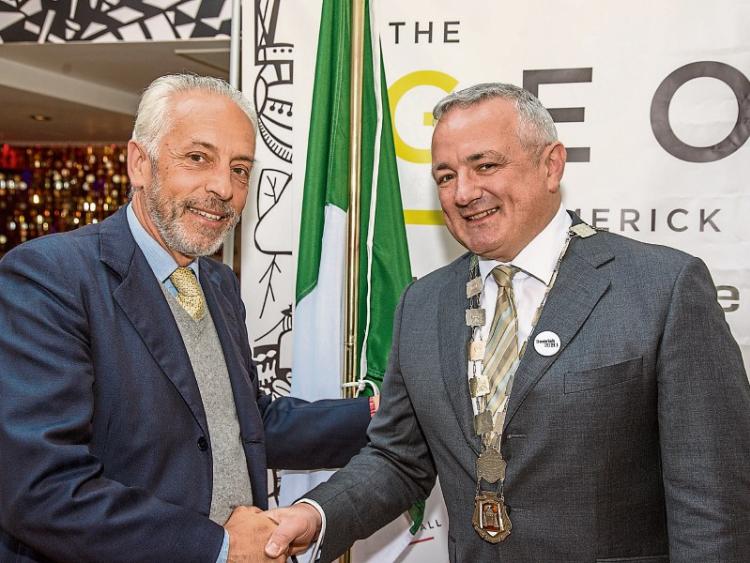 Italian Ambassador to Ireland, His Excellency, Giovanni Braccesi Chiassi with the Mayor of the Limerick Metropolitan district, Cllr Jerry O'Dea

THE Italian ambassador to Ireland has heaped praise on Limerick on his first official visit to the city.

His Excellency, Giovanni Adorni Braccesi Chiassi was on Shannonside for a two-day visit.

He journeyed to King John’s Castle and Glenstal Abbey, where he met Mayor of Limerick, Cllr Liam Galvin.

Following this, he enjoyed dinner at Da Vincenzo’s restaurant in the George Hotel alongside the chief executive of Limerick City and County Council Conn Murray, and metropolitan district mayor, Cllr Jerry O’Dea.

The business, run by Naples man Vincenzo del Santo, is itself marking a year trading.

”I have had such a warm welcome here,” Ambassador Chiassi said. “It’s the first time I have ever been to Limerick. Last year, I went to Kerry and Dingle, so could not stop in Limerick. But it is beautiful, a very beautiful city.”

He especially praised the River Shannon, and King John’s Castle, adding: “It is a very beautiful castle. It is very pretty. The view you have from the tower makes you understand it was a very important protective point.”

While in Limerick, the ambassador met some of the Italian Diaspora who have made the city their home.

“There are quite a number of Italians. I know you have Italian students not just coming to Limerick to learn English, but also studying full time,” he said.

Mr Chiassi said one thing he noticed was that many of Limerick’s Italian population come from a very small region near the capital Rome.

“They would often wonder whether they are more Italian or more Irish, as they are three or four generations here. But they are very united. They don't forget they are from Italy. Theygo back home every year, and bring a lot of Irish people there to visit. And I am sure it goes the other way too,” he explained.

As he sat down to dinner, the ambassador also noted that one thing which links the Irish and the Italian community is a love of food.

“Italians love good food. They love to spend a lot of time around the table to enjoy drinking and eating with friends. The difference between Italian and Irish people is we drink with food. You drink very often without food! But I have noticed while I have been here, there is more and more priority given to good food,” he added.