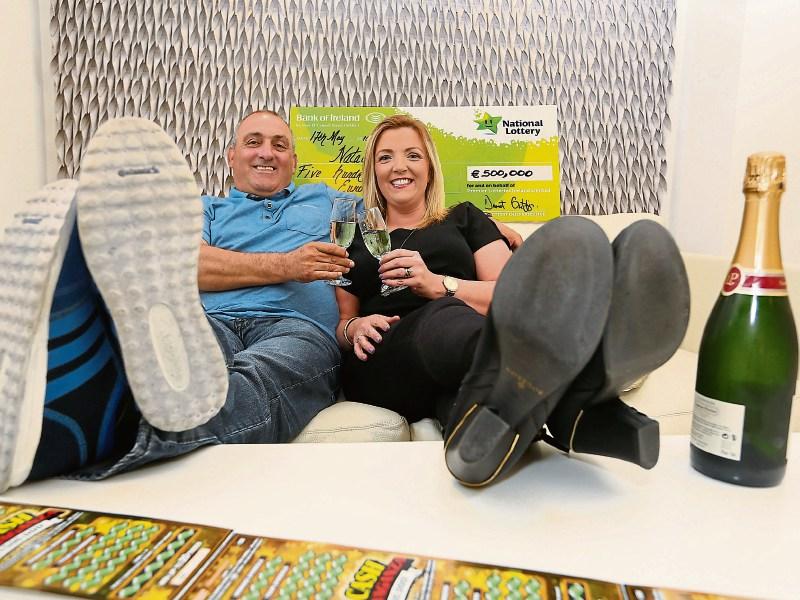 Natalie and husband James collected the prize this week after winning big on a €20 All Cash Extravaganza scratch card, which the Limerick woman purchased at The Ambassador Shop in Dooradoyle.

The Limerick prize winner said she was a regular scratch card player and wasn’t too surprised by the win.

“I almost always win something on them every week. I have won three €1,000 amounts before and two €500 prizes so to hit the top prize of a half-million euro is not really a surprise to me,” she laughed.

Outlining her plans for the winnings, she said the half million euro prize would be “very useful”.

“We are in the process of building a house extension at the moment so the money will come in very useful,” she explained.

“I always promised myself a new car if I ever won a large amount on a scratch card so on the way to Dublin today, I stopped off at the Toyota garage and I ordered the new Toyota Rav 4.”

Meanwhile, a winning couple from Co. Clare are also celebrating their own €500,000 win after hitting the jackpot in the EuroMillions Plus draw on Friday 13.

The winning Normal Play ticket was sold at Sean’s Shop, Drumgeely, Shannon, on the day of the draw. The winning couple wish to remain private, but said they were “lifetime players" of the Lotto and EuroMillions draws.

“It’s an amazing feeling to have the comfort of knowing that we have half a million euro in the bank,” said the woman who collected the prize.

“We have been playing the same numbers, week-in, week-out for nearly twenty years. We won smaller amounts in the Lotto draws a long time ago with the same numbers and recently, I even suggested we change them because I felt they were unlucky,” she added.