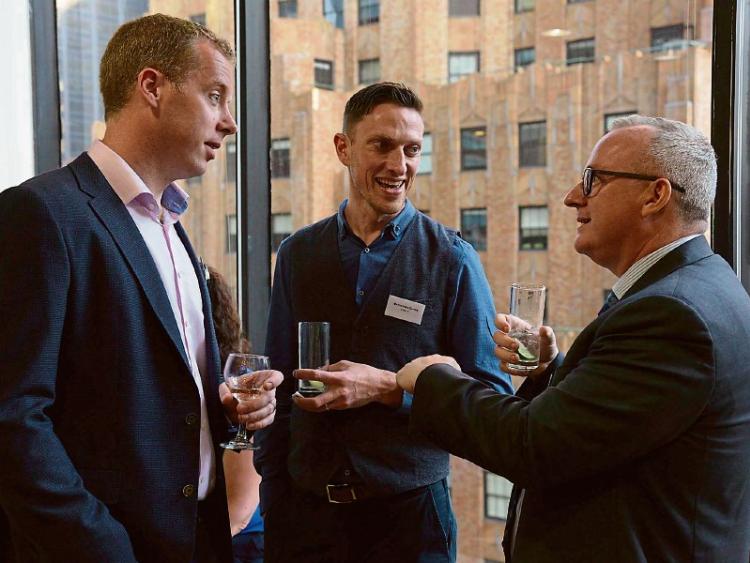 Donal Palcic, Fionnan Garvey and Kevin Haragadan, all University of Limerick graduates based in America

The chapter will serve over 300 UL alumni who call New York home, connecting them and former international students who studied at UL and supporting the strategic goals of the university.

The chapter will host cultural, social, community service, and educational events to engage the UL alumni community in New York.

Ms Jones, a graduate from the Computer Science programme in 1983, took up duty as Consul General of Ireland to New York in September 2014 having previously been Joint Secretary at the British-Irish Intergovernmental Secretariat in Belfast.

“Building from today, the chapter will connect former students and friends of UL in a powerful way,” she said.

UL Vice-President Academic & Registrar, Professor Paul McCutcheon acknowledged the over 80,000-strong alumni community that embodies the spirit of excellence and achievement that has become central to UL’s ethos.

Professor McCutcheon said their strategic plan, Broadening Horizons, “challenges us to continue to raise our international profile and thereby enhance the economic and cultural profile of Limerick and the local region.

Over the next five years, the Alumni Association will be expanding its network of alumni chapters overseas.

UL already has chapters in London, the first to be established in 1997, as well as in Boston, East Asia and Silicon Valley.