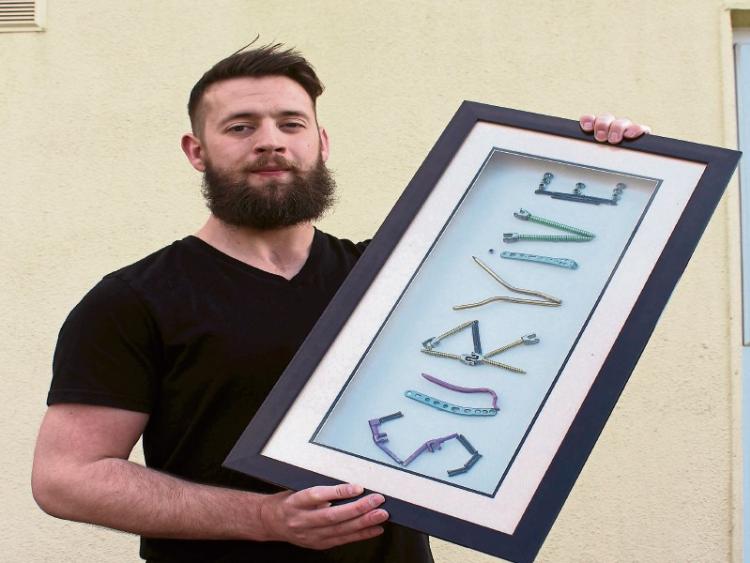 Survive: Ger O’Sullivan’s mum, Maureen, spelt out the word from some of the metal taken out of his body after surgeries

HAVE you ever interviewed a ghost? It is surprisingly easy. This one has a bushy beard, lives in Ballina and is heading to Barcelona on holiday. His name is Ger O’Sullivan. He should be dead.

The Castleconnell man fell 60 feet from a tower onto concrete but lived to tell the tale. Four years ago this May he jetted off to America on a J1 visa with his friends. Two months later he died twice on the operating table in Grand Strand Medical Centre in Myrtle Beach after somehow surviving the accident.

It was just an ordinary day at the amusement park where he worked on the zip-line attraction. Ger forgot to “hook in” to the safety rope, stepped back and went over the edge. His injuries and recovery from them have defined his last four years but he is not letting them define his life.

Twenty-six surgical procedures put the 26-year-old back together. His mother, Maureen, spelt out the word survive using metal taken out of his body. The artwork, pictured, hangs on his sitting room wall. Today, he is the picture of health.

“I can do everything I want, mostly. I can’t run, play sport or kick a ball but I can do pretty much everything else. I can drive my car, I can still walk around town - I might have to stop, sit down, have a cup of coffee and then start walking again.

“I go to the gym to do physio and everything is tailored to what my body can withstand and what is safe for it. I have a pretty normal lifestyle which is why I am so grateful and happy,” said Ger.

He puts it perfectly in a powerful piece he wrote for UL’s Ogham Stone literary magazine: “It is the best possible outcome from the worst possible accident.”

Ger’s injuries included compound fracture of the tibia and fibia in his left leg, right ankle broken into pieces, shattered pelvis - it was separated from his spine - broken right elbow and multiple organ failure. Fifteen pints of blood were pumped into him.

“I should be dead, that is what it comes down to. It is literally as simple as that.

“If I fell off that tower again 100 times out of 100 I would die. There is no logical explanation to why I survived it. It just doesn’t make sense.

“I always regard it as luck and timing - they were huge factors in my survival. I was in the hospital in 13 minutes. There was a team of doctors waiting for me.

“As much as my percentage of survival was low I had the best possible chance because I was there so quickly and they were working so quickly on me. They were fantastic.”

Ger literally landed on his feet.

“When I realised I was falling backwards I turned my whole body and I landed straight down just on my right side - that is why my right foot is as bad as it is. I didn’t bang my head or land on my back or I would have been killed instantly,” said Ger, who hopes to go on to be a teacher after completing a Degree in Psychology and Sociology and a Masters in English in UL.

But while Ger’s story does have a happy ending he went through hell to get there.

Days, weeks and months were spent lying in a hospital bed unable to communicate or move while in excruciating pain and he wondered, “Was it worth being alive?”

It was a long, slow process from getting out of a bed, into a wheelchair, moving onto a walker and eventually a cane.

“There were a few dark, depressing days but I had good support from friends and family - the kind of support where they wouldn’t let you get too down.

“There was a lot of encouragement. You feed off their energy and if they are all in good humour why am I being cranky? It is understandable to be cranky but I never let it get on top of me where I wasn’t able to pull myself out of it.

“Being in ICU the first time around was the hardest thing for me and when I was put back into a wheelchair after my second set of operations in the States in 2013. My depression would come with anger and shortness. I would be very short with people. I’d be very cranky with what I would perceive to be stupid questions.

“People complaining about little things would really annoy me. That’s what would make me down and upset me. It wasn’t even the pain or the physical injuries - they were a factor but that is what I struggled with the most, mentally.

However, his mentality hasn’t changed.

“I’m pretty much the same fellow I always was. I don’t ever crib or give out anymore. Don’t get me wrong, there are still days when I am extremely sore, in a lot of pain and have to lie in bed or on the couch all day. If I am on my feet for most of the day the next day is nearly always a write-off. There are days like that but I’m grand the day after.”

Ger has been back to the the hospital for the unveiling of a painting donated by his brother’s partner Helen Seego. He is still in contact with his doctors and nurses. From hardship grew friendship.

He and his girlfriend, Megan Hampson, went to New York last year and they flew down to Myrtle Beach.

The tower looms large on the King’s highway.

“It is high! It is very very high! It is what it is. I didn’t go up up to the top of the tower or anything like that. I was joking with my mam that I would go over on the zip line but she wasn’t too impressed!

“I didn’t see the tower and start quivering in fear or having flashbacks. The tower is the tower.”

One thing he noticed is that there is now a big net where he fell.

“I don’t hold a grudge towards that. I’m glad it’s there now. I fell because I didn’t hook in. It was my human error but there was no back up.”

The Berkeley balcony collapse tragedy touched the whole of Ireland as everybody has either been or knows someone who worked abroad in their student days.

For Ger it was very close to home.

“I didn’t enjoy hearing or reading about it. It brought back a few memories but it is incomparable really. A lot of people said to me’ would you not contact the survivors?’ and I said ‘no, what am I going to do?’.

“They have lost friends, that is the last thing someone wants to hear when they are in a hospital bed in the States that somebody is doing well.

“I was told a story about a bride and her husband on their wedding day getting blown off a cliff by the wind when they were taking pictures. I was lying in a hospital bed thinking ‘why are you telling me that story for?’. I would think it would be disrespectful, personally, to try and contact them to give them a gee up.

“My accident was a tragedy for my family and friends. Berkeley was a tragedy for them. When I heard the news it was very upsetting. That could have been me, it puts into perspective and just how fortunate I was.”

He knows there are more surgeries to come but has  “no complaints”.

“Everything is normal for me again. I wouldn’t say acceptance or anything like that, it is just my normality. There are a lot more people worse off than me.

“There are a lot of people struggling with a lot more serious things than a couple of aches and pains I get during the day. I wouldn’t make a big fuss about it, just drive on.”