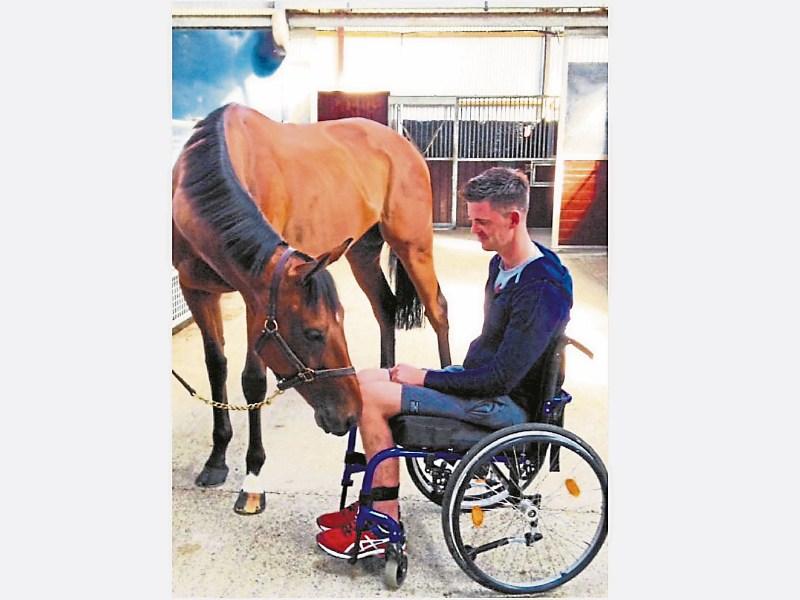 “AND so the training career begins. New owners and horses very welcome. The road to Cheltenham starts here.”

It was a short tweet sent out on a Bank Holiday Monday but behind it was a remarkable story of one young man’s triumph over immense adversity.

Sadly, a brilliant career in the saddle was cut short by a fall at Wexford Racecourse in April of last year which left him with no feeling in his legs.

Since the early days of his recovery at the National Rehabilitation Hospital in Dun Laoghaire, Robbie had set his sights firmly on a training career.

And, after much preparation, the pieces of the jigsaw are fitting nicely into place.

“I’m very much looking forward to starting. My father is a trainer and my mother was up yesterday and she said, ‘You are finally doing what you wanted to do since you were about five’. I always wanted to be a trainer,” Robbie told the Leader this week.

Growing up in Croom, the young Robbie McNamara was surrounded by horses.

Robbie’s father Andrew trained Boreen Prince to win the Arkle Chase at the Cheltenham Festival in 1985. Last August, his brother Andrew announced his retirement from race riding to become a trainer. Robbie’s cousin, JT, who is paralysed from the neck down following a fall in Cheltenham in 2013, is already carving out a new career as a trainer from his home in Croom.

While Robbie hasn’t officially begun training —  he begins his trainer’s course next week which runs over three days for three weeks — he is busy putting everything in place for his new career at his stables on the Rathbride Road on the Curragh.

“Obviously, I still have to do the trainer’s course. A lot of it concerns health and safety and protocol of doing things the right way. Hopefully, I will get my licence after that. I’ve a good few horses on the go. I bought a few in England and a few in Cheltenham as well.”

The 27-year-old who lives in Kildare — about 10 minutes from the Curragh – also works with the National Stud where he works in the nominations and sales department of the Kildare operation. “I would be in the yard most of the time and then I would be on the phone and going to the sales for the National Stud as well.”

Displaying immense mental toughness, the Croom native returned to the saddle just three months after the fall that left him with no movement from the waist down. At a riding school in County Wicklow, Festina Lente, Robbie mounted a horse once again.

And he continues to ride out from time to time. Footage posted to his Twitter page in March shows him riding out on a friend’s horse.

“A friend of mine bought a horse and he seems quiet so I get up on him for a little while.”

Robbie has extensive experience in the horse racing industry having ridden for Dermot Weld for almost a decade – he joined him the morning after finishing his last exam at Crescent College Comprehensive.

As a jockey he enjoyed success on the double during the Cheltenham Festival of 2014.

The Croom man recorded a memorable first win at the famous festival when partnering the Dermot Weld-trained Silver Concorde to victory in the Weathersbys Champion Bumper.

And he continued on his winning ways just 24 hours later when he stormed up the Prestbury Park hill aboard Jim Culloty’s Spring Heeled in the Kim Muir Chase.

His decision to commence a career in training leaves people in no doubt about his intention to succeed in the next stage of his life.