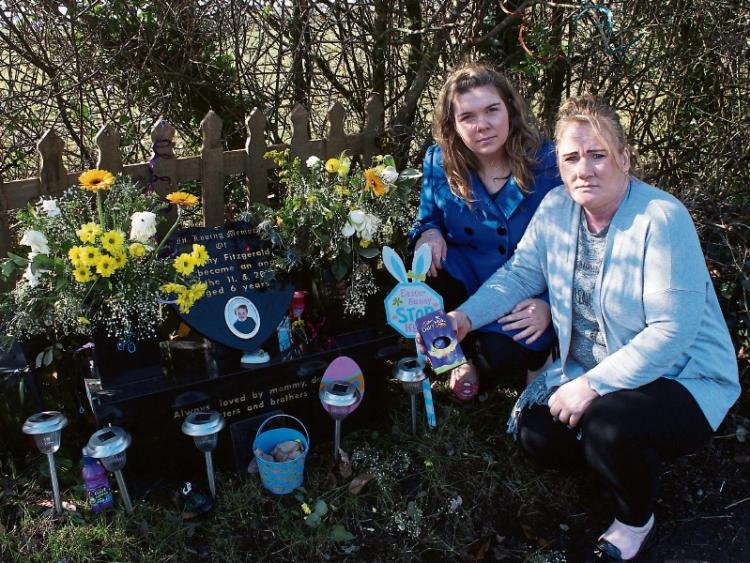 Cllr Lisa Marie Sheehy and Eileen Fitzgerald at the memorial plaque to her son Anthony, who was killed in a car accident in Murroe     [Picture: Michael Cowhey]

A LIMERICK councillor has reiterated her demand for speed ramps on a stretch of road that has claimed two lives.

Cllr Lisa Marie Sheehy and Eileen Fitzgerald, the mother of a six-year-old Anthony who died outside their Murroe home in Ros Fearna, called for the safety measures to be installed last month.

“Ramps are the only thing that physically slows down traffic. There have been two fatalities on that stretch of road outside Murroe in the last 10 years.

“I was there with Eileen Fitzgerald when she was putting flowers at her son’s memorial plaque and cars were speeding by. She is afraid the same thing is going to happen to other children and pedestrians,” said Cllr Sheehy.

John Sheehan, executive engineer with Limerick City and County Council, said he accepted that ramps do slow down traffic but it would be setting a precedent.

“We don’t have ramps on roads in rural parts. There has been two fatalities of pedestrians in the last 10 years. The speed limit is 50kmph. We have spent a lot of money on the speed radar signs, we repaired the fence, we put in a footpath. We have done as much as we can outside ramps. I accept ramps would slow down traffic but it is a precedent.

“At the moment we are not allowed to put them on roads. We are allowed to do it in estates where children are playing in green areas. We are waiting for policy on the issue,” said Mr Sheehan.

Cllr Sheehy accepted it would be a precedent and the safety measures the council have put in place but, “there have been two fatalities in the space of 10 years”. Mr Sheehan asked if she had spoken to gardai.

“If gardai enforced the speed limit it would have a positive impact,” said Mr Sheehan.

Cllr Bill O’Donnell, chairman, brought up Banogue, which has been targeted by speed vans for years.

“Even if people see that the speed van isn’t there people wait until the sign to speed up again. If there is enforcement people get the message,” said Cllr O’Donnell. Cllr Sheehy proposed they speak with Kieran Lehane, director of travel and transportation, about the policy on ramps.

Mrs Fitzgerald told the Leader last month that installing ramps on the straight stretch of road outside the village is the “only way” to slow cars down.

“People don’t take any heed of those flashing speed signs. At Easter I was putting down flowers at his plaque and I was watching the cars going up and down. Every car that went by the speed sign flashed red – not one car was under the speed limit,” she said.