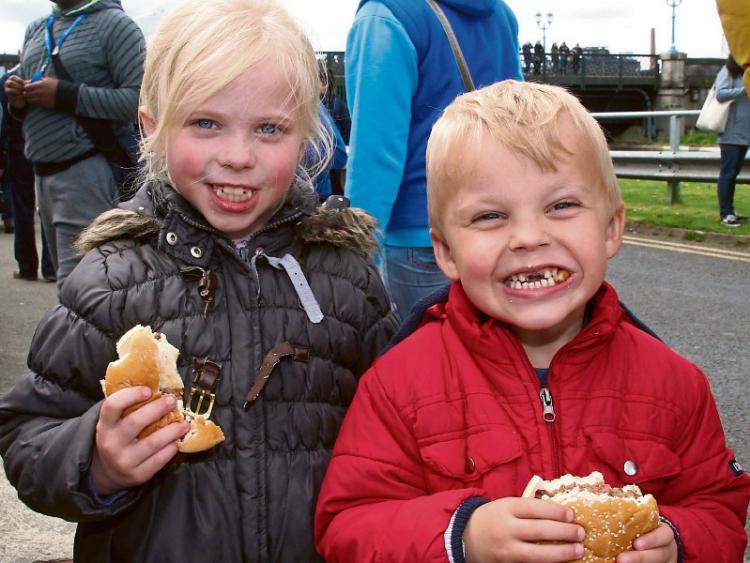 THERE were sensational sights, smells and sounds on the Shannon today as the centrepiece of Riverfest 2016 took place.

Brisk weather, including spots of rain, failed to keep the crowds away from Honan's Quay, where the annual barbecue contest - the biggest in Ireland - got under way.

Some 30 cooking teams from across Limerick took part in the barbecue cooking a range of dishes, including beef, chicken and fish. Some entrants even cooked deserts on the coals.

The overall prize went to Sareva Bistro, Corbally, for a second year in a row. Chefs Mark Irwin and Jonathan Flannery will again represent Ireland at the World Barbecue Association's European Championship taking place in Bremen this September.

Other groups and businesses cooking for the public included the Ugandan community in Limerick, the local Filipino community, culinary students of the Limerick Institute of Technology, and the French table restaurant.

Munching on a chicken burger, mixed with Sauerkraut from this stall, O’Connell Street man Jack Little praised the move of Riverfest back to the banks of the Shannon.

"We should use the river more. What we need to do is get rid of the old Dunnes Stores behind us, and fill it full of cafes, restaurants and bars. This is one of the best views of Limerick," he said.

The barbecue is just one of many events taking place in Limerick this weekend.

Tomorrow, up to 12,000 people will pound the city streets as the Great Limerick Run takes place.

And there will be a spectacular firework display over the Shannon on Sunday evening around 10pm.

Riverfest comes to a close on Bank Holiday Monday, with a family fun day, with Get West hosting a family fun day including kayaking. The firm will also erect Ireland’s tallest mobile climbing wall.

Enjoy the Bank Holiday Monday of Riverfest on the waters of the river Shannon.

For more information on what's on, visit: www.limerick.ie/riverfest/whatson

For pictures, and further reaction from the Riverfest Barbecue, please see the Limerick Chronicle, out Tuesday morning.