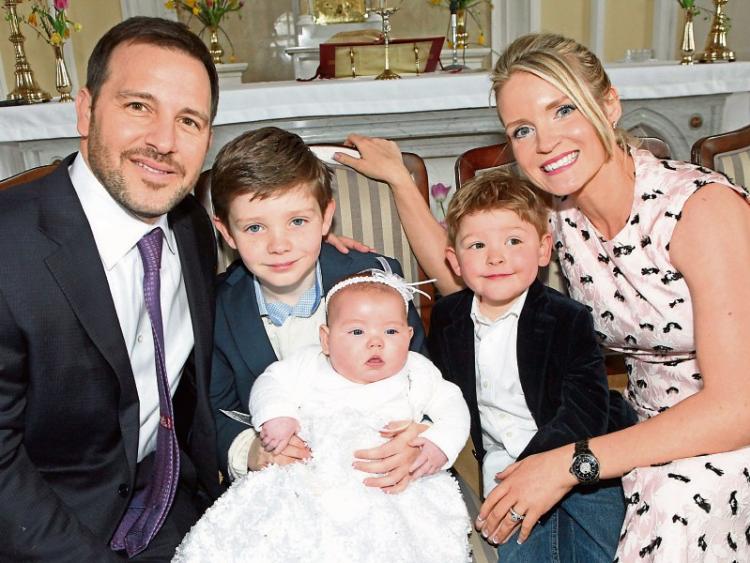 Jesse and Elaine Young, Patrickswell, with their three children Jake, Cooper and Abigail, who they travelled from New York to Limerick to baptise in Herbertstown church

NO MATTER where you are living in the world home is always where the heart, says Limerick’s Elaine Young.

The Patrickswell woman represented her county with pride when she was crowned Miss Limerick as Elaine Carroll - and narrowly missed out on the Miss Ireland title in 2001.

Despite moving abroad there is no place like home for Elaine, who has just returned to New York after travelling to Limerick especially to baptise her third child.

The beautiful Abigail, aged four months, was christened in Herbertstown church this month.

And not only Abigail, Elaine and her American husband Jesse also came back to County Limerick for the baptisms of Jake, aged nine and Cooper, aged four.

“With every single baby I’ve had I have always come home to baptise them. To be honest with you it is home, it’s not the same back in New York.

“It is also a great excuse to get everyone together, all my immediate family, nieces and nephews - it is just home and keeping an Irish tradition going,” said Elaine, who is a daughter of Robert and Mary.

After winning Miss Limerick she was snapped up by Assets Model Agency and worked with them for four years.

“The reason I actually went and started working in Dublin was I wanted to save up to study in the Gaiety School of Acting,” said Elaine.

She moved to England to pursue her career and then onto New York – where Jesse is from – five years ago.

“I’ve done mainly independent films, commercials and a bit of TV.  I’m an actress in between making babies,” she smiled.

Elaine studied performing arts in the UK and also in the famous Michael Howard Studios in the Big Apple.

“I am hoping to get back to it next year. Studying with Michael Howard is amazing. You are always trying to improve yourself and be a master of something.

“I will resume my studies in performing arts and hopefully represent Ireland,” said the proud Limerick woman and mum.