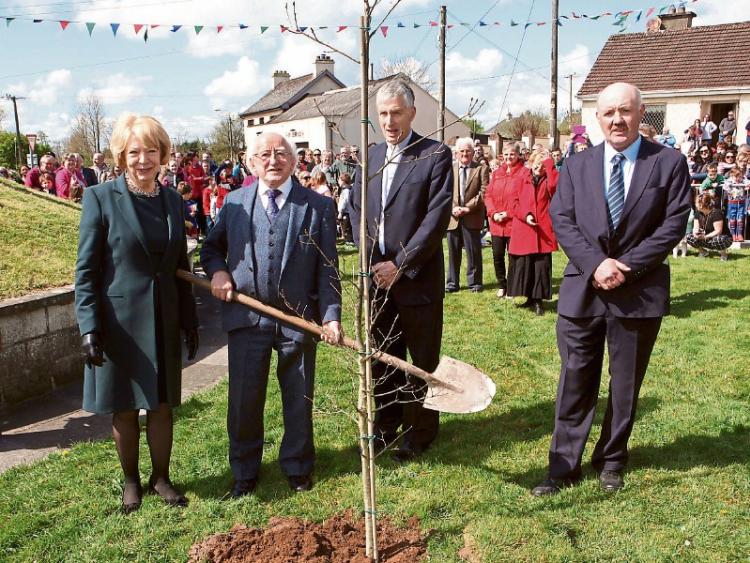 President Michael D. Higgins planted a tree in the company of his wife Sabina, Fr Simon Sleeman and Tom Holmes

ON MAY 27, 1923, the Most Rev Dr Harty said in Murroe: “The men who died for Ireland died not for a party, but for the nation. Keep their names forever free from party strife.” He was unveiling a memorial Celtic Cross to the men of East, Mid and West Limerick Brigades killed in action against British soliders in 1920-21.

Those words from a newspaper article in 1923 were read out by chairman of Murroe Historical Society, Tom Homes, before the arrival of President Michael D Higgins to plant an oak tree in the village.

The 20-foot sculpture by William Gaffney was the first in the country to be erected after the Civil War to commemorate Limerick men who died in the War of Independence. The names of Brigadier Sean Finn, Brigadier Sean Wall, Adjutant Patrick Ryan and Lieutenant John Frahill grace the monument.

Cut from a huge limestone block, it carries the inscription, “Greater love than this no man hath, than a man lay down his life for his friend”.

Crowds gathered upto an hour before the president was due to arrive. One lady with her walker, which she called her ‘Merc’, was there early to get a good vantage point. Shortly before high noon, with the sun high in the sky, he arrived in his Mercedes, accompanied by wife Sabina.

A round of applause went up as they were greeted and led to the stage. Denis Holmes, MC, said the parish is steeped in history and thanked President Higgins for making this another historic day. Happy Birthday was sung for President Higgins, who thanked the crowd for their good wishes in marking “my miles in life”.

“How greatly uplifting it has been to witness how so many of our communities have taken the initiative to develop and deliver their own unique commemorations of the events of 1916. It has encouraged our communities to embrace this historic moment in a spirit of creativity and the reaction has been immense,” said President Higgins, who thanked for Fr Simon Sleeman for inviting him and everyone for the warm welcome.

The planting, throughout 2016, of sixteen trees that will take root, grow and flourish within the community of Murroe, and will provide a profound connection to the past in the years and decades to come, is one such inspiring and imaginative commemoration, he said.

“It is most apt that we plant this tree beside the Murroe memorial cross erected in 1923 to honour those from the Limerick Brigades who fought and died during the Irish War of Independence, and which today stands as a beautiful and fitting monument to the sacrifice of a generation.

“In this important year we’ve been recalling the selflessness of the many men and women who aspired towards, and fought for, Irish independence. They may have differed in the ideals they emphasised, yet all of them, with their different ideas for the future of the nation, came together to pursue what they shared, a dream of independence.

“At the very heart of republicanism lies the principle of participative citizenship. It is a concept based on an understanding of the accountable State as a shared responsibility, rather than an abstract entity, of an economy that is seen to serve all of the people in their sufficiencies rather that the insatiable consumption of the few. It is important that we remember and acknowledge that 1916 was about more than military or political actions. The leaders, in the best of their aspirations and writings, were inspired by the idea of creating a very different Ireland and they believed in a social as well as a national revolution in which every facet of Irish life could be improved,” said President Higgins.

The Ireland we know today began its life as a courageous vision.

“One hundred years later we are called to consider, in a new way, the ideals which inspired those men and women in 1916, to test them, retrieve them, add to them, and make our own new vision for a coming generation; honouring the memory of the men and women who fought for a free Irish State, and continuing the important work which they envisioned and for which so many were prepared to give up their lives,” said President Higgins, who met with a number of relatives of the men whose names are engraved on the monument.

“I came down as a spectator to see the men being honoured, not expecting to meet President Higgins. He said it was a pleasure to meet somebody belonging to the men that the monument was for,” said Ms Reynolds. Gobnait Wall Kelly, niece of Sean Well, was equally delighted to meet the man born in Limerick city and Sabina admired her father, Liam’s medal.

Tom Holmes – John Frahill was a granduncle – described President Higgins as a very learned individual with a “thirst for knowledge”. “He wanted to see their names on the monument and I showed him,” he said. Tom Seaver made a presentation of his book A 1916 Fingallian Rebel  - a permanent reminder to the president of his visit to Murroe.