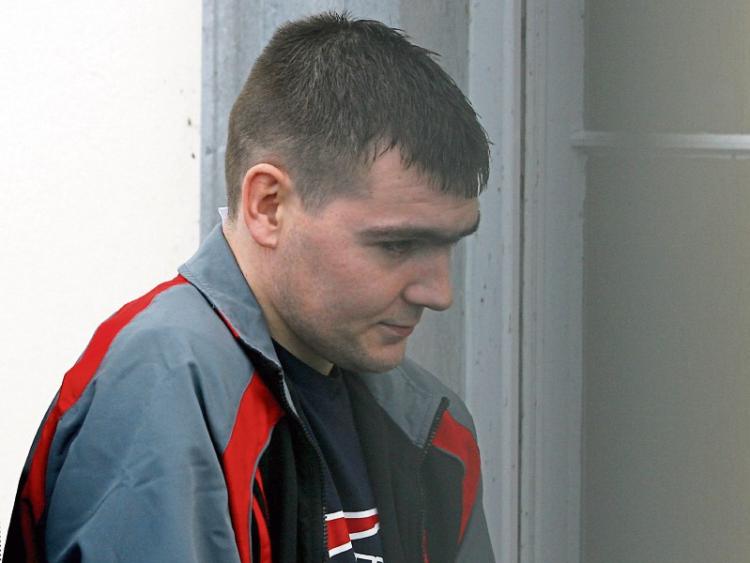 A file picture of Gary Campion at Limerick Court

LIMERICK criminal Gary Campion, who is serving two separate life sentences for murder, has reportedly been found “unresponsive” in his cell at Mountjoy Prison.

The Moyross man, currently serving separate life sentences for killing Brian Fitzgerald in 2002 and Frank Ryan in  2006, has – according to widespread media reports – was rushed to hospital this Thursday morning.

The 32 year old, from Pineview Gardens, had sought to have his convictions for the two city murders overturned last year.

A Garda source has reportedly told Breakingnews.ie that Campion “overdosed in his cell” and his family had been notified.

Mr Fitzgerald (34), who was head of security at Doc’s niteclub, was shot by hitman James Martin Cahill (40) outside his home at Brookhaven Walk, Corbally in the early hours of November 29, 2002.

Campion was the driver of the motorbike used by Cahill to flee the scene of the shooting.

During the appeal last year, Martin O’Rourke SC, submitted the original trial judge was “fundamentally in error” when he refused a defence application to have Cahill assessed by a psychiatrist.

In his evidence during the trial, Cahill said he was hearing screaming and voices in his head and that they only went away when he told the truth about the things he had done in his life.

Mr O’Rourke said a medical examination of Cahill should have been facilitated to establish whether or not he suffered from any mental health issues and that the failure to order such an examination put his client at a disadvantage.

In relation to Campion’s conviction for murdering Frank Ryan, the principal ground of appeal relates to the admission of evidence from State witness Errol Ibrahim in the original trial.

The car was situated between two street lamps and the evidence was that the street lamps weren’t operative on the night in question.

Mr Ibrahim was a passenger in the car and the prosecution relied on him as a direct witness.

Mr O’Rouke submitted gardai ‘leaned on’ Mr Ibrahim - making him choose between a charge of withholding information and being a suspect for murder.

Judgement was reserved in the case.