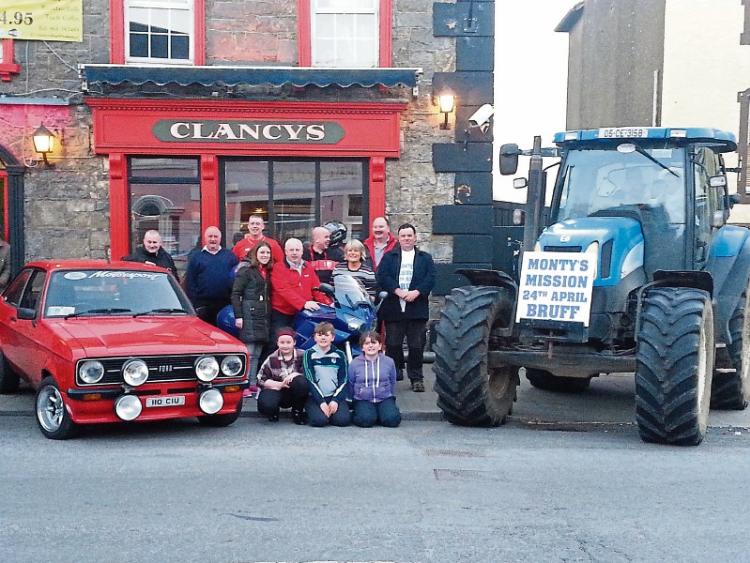 Maurice 'Monty' Tierney, centre in red jacket, with locals ahead of Monty's Mission which takes place in Bruff this Sunday Picture:Maria Quain

WITH a deafening roar of engines, a range of tractors, cars and motorcyles will depart from Bruff on Sunday, April 24 as part of a charity run to raise funds for local man Maurice Tierney who is to undergo cancer treatment.

Maurice ‘Monty’ Tierney will shortly be undergoing treatment that will require him to stay in Dublin for some time.

“He has been diagnosed with cancer of the bone marrow. We are trying to get him up to Dublin for treatment,” explained his brother-in-law Martin Cusack of Sycamore Drive in Bruff.

They have two children Brian and Jane.

Martin is well-known in the Bruff area as he drove a bus for Joe Lawlor Coach Hire and would have taken Bruff RFC teams to many games in the past.

He was diagnosed just before Christmas but he extent of the illness was not established until after Christmas.

“He has good days and he has bad days. He had to go in for chemo and he has to go into isolation then for five or six weeks in Dublin as well.”

Monty’s Mission on April 24 include a car run, a tractor run and a motorbike run followed by a dance that night in Clancy’s Bar.

The route for the tractor run will be Athlacca, Fedamore, Meanus; the cars which will include vintage models and rally cars are going for a three-hour spin while the motorbikes will take off in the direction of Mitchelstown.

It costs €20 to sign on for any of the three events.

The start and finishing point for all three events is Clancy’s Bar in Bruff.

“Jack Clancy is providing all the food in the morning for the boys before they take off and will have more food for them when they come back,” Martin explained.

We are auctioning a Liverpool jersey from Jamie Carragher’s testimonial match. We have the jersey signed by him and we will be auctioning that off on the night. The funds raised will go towards the costs of Maurice’s care.”