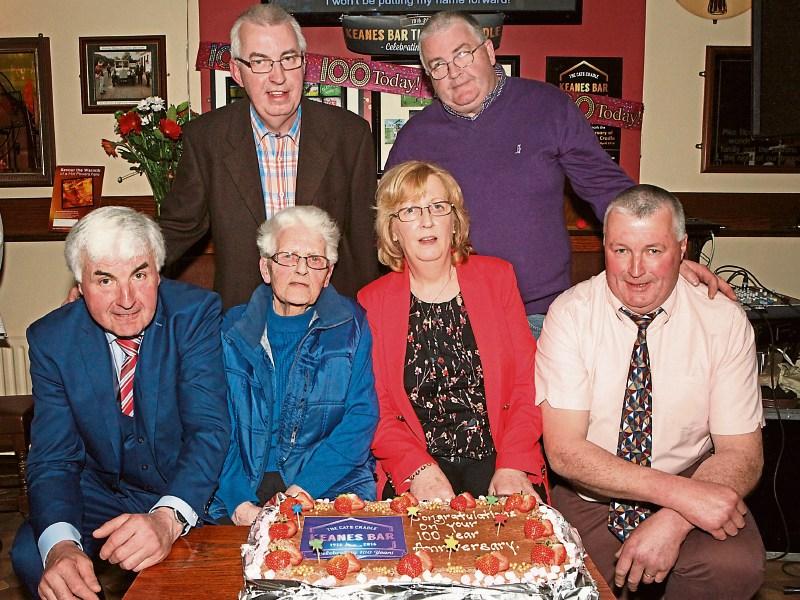 Molly Keane with her sons; Pat, Stephen, John and Mike and daughter; Helen at the 100th anniversary of The Cat's Cradle [Picture@ Dave Gaynor]

WHEN Ellen Shiels from Drombanna became owner of the pub now known as The Cat’s Cradle, in 1916, horses provided the primary mode of transportation and were tied to iron rings outside the pub while their navigators went inside for a drink.

Cocktails were an unknown entity. Social media wasn’t even invented.

One hundred years and three generations later, society has changed vastly. But the tastes of the clientele at this country bar have virtually remained the same — a nice Guinness is the most sought after beverage to slake the thirst while the appetite for good conversation and banter is as insatiable as ever.

“We had a massive crowd here on Saturday night,” says Pat Keane, sitting on one of the low stools of his bar, The Cat’s Cradle, this Monday afternoon.

Beside him sits his sister Helen, and beside her again is their mother, Molly, 86 years young.

Pat sips from a cup of coffee having been “scrubbing all day” in an effort to bring the public house back to its former glory after the weekend’s celebrations which included a pig on a spit.

The pub, located at Carrigmartin, Bally-neety around five miles from Limerick city, celebrated its 100-year anniversary on Saturday night when family, friends and loyal customers gathered to reminisce on good times.

The pub has been in the Keane family since 1916.

“My grandmother Ellen Shiels took it over in 1916. She married John Keane from Raheen, Ballyneety. He was a creamery manager in Drombanna creamery,” Pat explains.

Their son, Pat’s father Tommy, took over the business in 1962. He ran the pub with his wife Molly Keogh from Dromkeen from 1962 until he died in 1977.

“It was called a gentleman’s drink that time,” says Molly who raised her five children, Pat, Helen, John, Michael and Stephen, overhead the bar. Molly ran the bar until 1991 and Pat has been running it ever since.

“When Cahernorry quarry was going there would have have been good customers coming up from the quarry but that closed then and things quietened down. There was no food served that time,” she explains.

Helen interjects: “But you had a bit of a shop and sold newspapers.”

“You would have had sandwiches and things there for the boys,” smiles Molly, before Helen reminds her of the “bona fide travellers”, who, under the Licensing Act of 1872, were served outside of normal trading hours.

According to the rules, to qualify for late night or all day drinking on a Sunday in Ireland, one was required to have “travelled in good faith” for a distance of three miles, by public thoroughfare, from the place they spent the night.

“If you lived within three miles of the pub you couldn’t get a drink,” Molly explains. “You had to live further than three miles”.

”People from Mulgrave Street would have travelled out here for a drink,” Helen adds.

While the prem-ises was always known as Keane’s Bar, Molly’s husband  Tommy decided to name it  The Cat’s Cradle in 1970.

“There was a Mass rock across the way in the shape of a cat’s cradle, where Mass was celebrated in Penal Times,” says Pat, who has been pulling pints since he was “knee high”.

According to Molly, Guinness was the most sought after drink in the old days "and it’s still Guinness today", smiles Pat.

The Keane family have a long association South Liberties GAA club dating back to 1884. Pat’s late father Tommy was an official with the club.

His nephews Mark, a former Limerick senior hurler, and Michael were part of the 2009 Intermediate team the year the club added the County and Munster Intermediate club hurling championship to its honours.