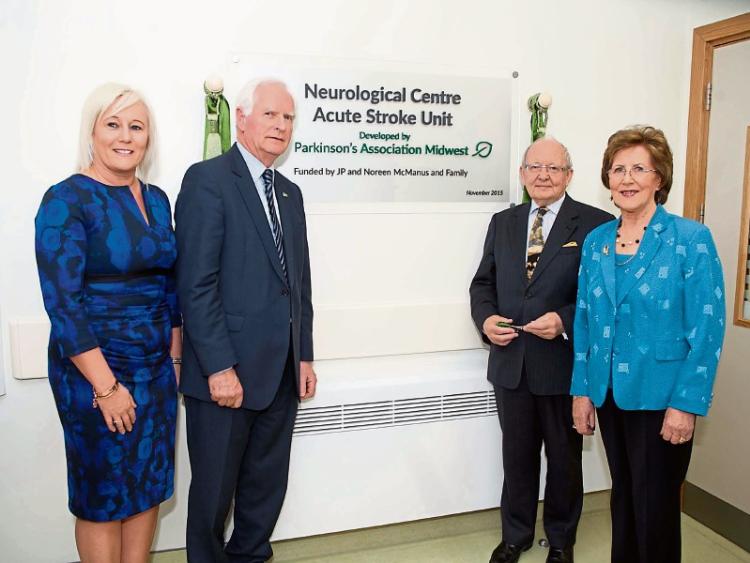 The plaque, which was unveiled on Friday afternoon, was in recognition of the Parkinson’s Association of Ireland’s and the McManus family’s efforts in developing the unit.

The €3m unit is part of UHL’s new six-storey Leben Building, which was a project delivered through a cooperation between the HSE, Parkinson’s Association, Cystic Fibrosis Association of Ireland and the Mid-Western Hospitals Development Trust.

Parkinson’s Association special projects chairperson, Una Anderson Ryan said that the organisation has endeavoured to set up a “modern, state-of-the-art facility” for the past 10 years, and that the old 3B ward was not fit for purpose.

She added that the process, from the beginning to the delivery, has been “an arduous task”.

She also commended the McManus family for their contribution. “We believe that this new neurological centre will be a tremendous asset to the people of the Mid-West and the fact that it has been built at no cost to the state is hugely significant. The impact of the McManus family on the Mid-West region is truly awesome and words do not exist to thank them fully and adequately.”

“[It] is becoming a bigger and bigger part of what an acute hospital like UHL does. The technology, the drug treatment and the management of acute stroke patients has changed dramatically in recent years and that will continue to be the case. That makes it all the more important to have the right facilities to deliver optimal care to stroke patients,” he said.

Additional equipment costs were met, jointly, by the Parkinson’s Association of Ireland, the HSE and the UL Hospitals Group.