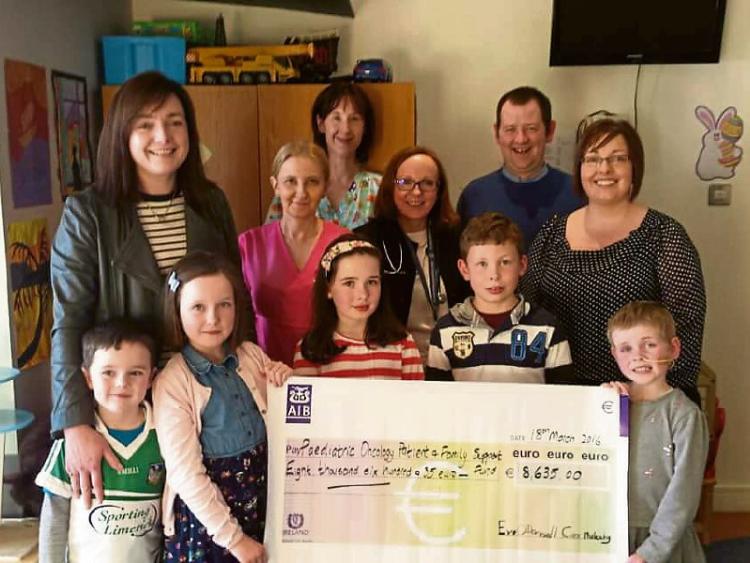 Eve and her first cousin Ciara, 7, hold the cheque for €8,635 which was presented to Ciara’s doctors and nurses in the Children’s Ark, University Hospital Limerick in the company of their families

WHEN Eve O’Donnell decided to grow her hair and donate it to the Rapunzel Foundation, which makes wigs for those going through cancer treatment, little did she know that her kind gesture would also be assisting her own first cousin.

Eve, 8, from Martinstown decided over two years ago to grow her hair and donate it to the Rapunzel Foundation. This cause came closer to home when, in February 2015, her first cousin Ciara Mulcahy, 7, from Effin was diagnosed with a stage four tumour on her left kidney.

“Catherine explained that people with long-term hair loss sometimes use wigs and explained about how people sometimes donate their hair to help make the wigs. Eve asked her mother could she grow her hair and donate it.”

It came as a great shock to the family then when Ciara was diagnosed with a stage four tumour.

“It was a big blow for all the family but kids are resilient,” said Pat. “Eve, Ciara’s sister Amy and their cousins rallied around Ciara and gave her great support to make her life as normal as possible.”

Since Ciara’s diagnosis she has spent most of her time going between University Hospital Limerick and Crumlin Children’s Hospital undergoing intensive treatment. When Ciara began to show signs of illness her parents John and Mairead initially thought that she had a kidney infection.

“Our lives were turned around within 24 hours,” said John. “There was a tumour on the kidney.”

Thankfully, Ciara is now in remission. “She is back to school and doing very good,” said John of Ciara who is in first class in Effin national school.

When it came to Eve’s impending haircut she decided that she would like to thank some of those who have cared for Ciara, by fundraising for the Oncology Fund in the Children’s Ark, Limerick University Hospital.  She received an unbelievable response to her kind gesture which saw 14 inches of her beautiful brown locks being chopped off at Rainbows Hair Salon in Charleville.

“She was not fazed by the idea of cutting her hair but looking forward to it as her motivation was to help others and raise money for the Paediatric Oncology Patient and Family Support Fund to say a big thank you to those who had helped Ciara and her family,” Pat continued.

On Friday, March 18, Eve and Ciara presented a cheque of €8,635 to Ciara’s doctors and nurses in the Children’s Ark.