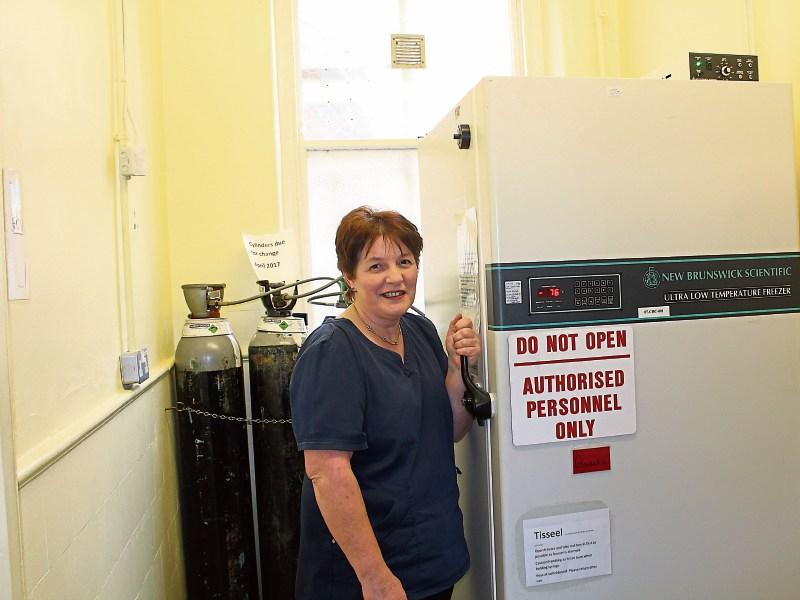 AROUND 40 people, who undergo hip revision surgery at Croom Orthopaedic Hospital, benefit from bone donated by patients every year.

This is according to Croom’s Bone Bank co-ordinator and theatre nurse, Anne McCormack, who has been involved in the initiative since its inception in 2000.

Bone donations are received by those who undergo hip replacements, and each are managed by the Croom Retrieval Centre, which also supplies the rest of Ireland, via the Bank Bank at Cappagh National Orthopaedic Hospital.

The Bone Bank imports and stores femoral strut grafts (grafts from the thigh bone) from the United States, which are used for complex surgeries, where a person’s prosthesis fractures through the thigh bone, after they have had a hip replacement.

Ms McCormack said that when the hospital previously needed bone, it required it to be ordered from the Bone Bank in Dublin, which was then transported by a specialist courier, at 40 minus degrees Celsius.

Each femoral head, according to a spokesperson for the UL Hospitals Group, would cost in the region of €1,500 to buy in.

Ms McCormack said that people can require revision surgery from 5 to 20 years after having their first hip replacement complete.

“This is through wear and tear and when the femoral head part of the prosthesis goes up through the acetabulum. This can create quite a large hole and we need to fill that gap.

“In the past we would have used cement to fill it, which you would need a lot of, which was not a natural product and which could come loose. Then we started using bone. Using your own bone is the ideal for any graft but a person would not themselves have enough bone to fill that gap in the acetabulum. And so when people come in to have their primary hips done, we ask them to donate the femoral head which they no longer need.

“When doing revisions, we would sometimes use two large femoral heads. They are ground down and look a little like mincemeat but they are in fact minced bone. They are packed into place. If we grafted today and brought you back six months later for X-ray, you would not see the graft because it will have been incorporated into your own bone. It is a much more natural process whereas you would still see the cement there 10 years later,” she explained.

After patients give consent, blood and microbiology tests are done, and are repeated six months later to avoid any complications. The bone is then stored at around minus 80 degrees, with a shelf life of five years. There are currently 120 femoral heads at the Bone Bank.

The Bone Bank is a member of the American Association of Tissue Banks.