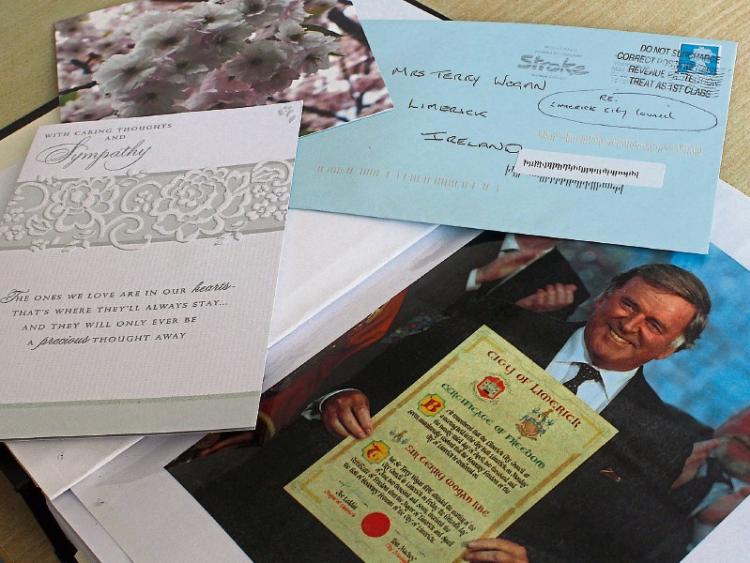 THEY lifted the pen. Picked out their space on the page. Thought carefully about what flow the ink would follow and tone their entry would take.

At 10am on Monday, February 1 last, a book of condolences was opened at Limerick’s City Hall in memory of Terry Wogan who passed away the previous day aged 77 after a battle with cancer

A second book was opened at County Hall in Dooradoyle, and a third online.

“We have put up books of condolences for various tragedies but this, as they say, broke the internet,” says Laura Ryan, communications officer with Limerick City and County Council, sweeping her hand across the gold-embossed front cover of The Books of Condolences for Sir Wogan.

“We had more than 5,000 people leave messages of condolences. There was this massive spike in visitors to Limerick.ie which is our official Limerick website - purely as a result of this. It was up 60%. The BBC put a link on their website to Limerick.ie and that’s why.”

At a time when the internet is king and correspondence is often whittled down to 140 characters and emojis, the written word is becoming almost a lost art. This leather bound book, just eight weeks old by now, evokes a sense of an older time. The handwriting, featuring various loops, slants and spacings is often beautiful, sometimes messy, but always as unique to the individual as the message they have penned.

In many cases the labour and reflection which has gone into each individual tribute is telling.

On turning over the front cover, two envelopes fall loose. One is addressed to Lady Helen Wogan and Family, Limerick, Ireland, with 1st Class written across the top; the other is sent simply to Mrs Terry Wogan, Limerick.  The senders – a William from Eastway in London, and a Mr and Mrs Goulborn (Loyal TOGS Terry’s Old Geezers or Gals) - chose the card they felt most fitting, one with soft pink cherry blossoms -  took time to engage in the physical act of writing their personal sentiments before sealing closed the envelope, and putting it in a post box.

“It’s amazing. I’m so glad that we put it together because I think that it is going to give a huge amount of comfort to his family,” continues Laura.

Liam Galvin, Mayor of Limerick City and County is the first signature on the first page. 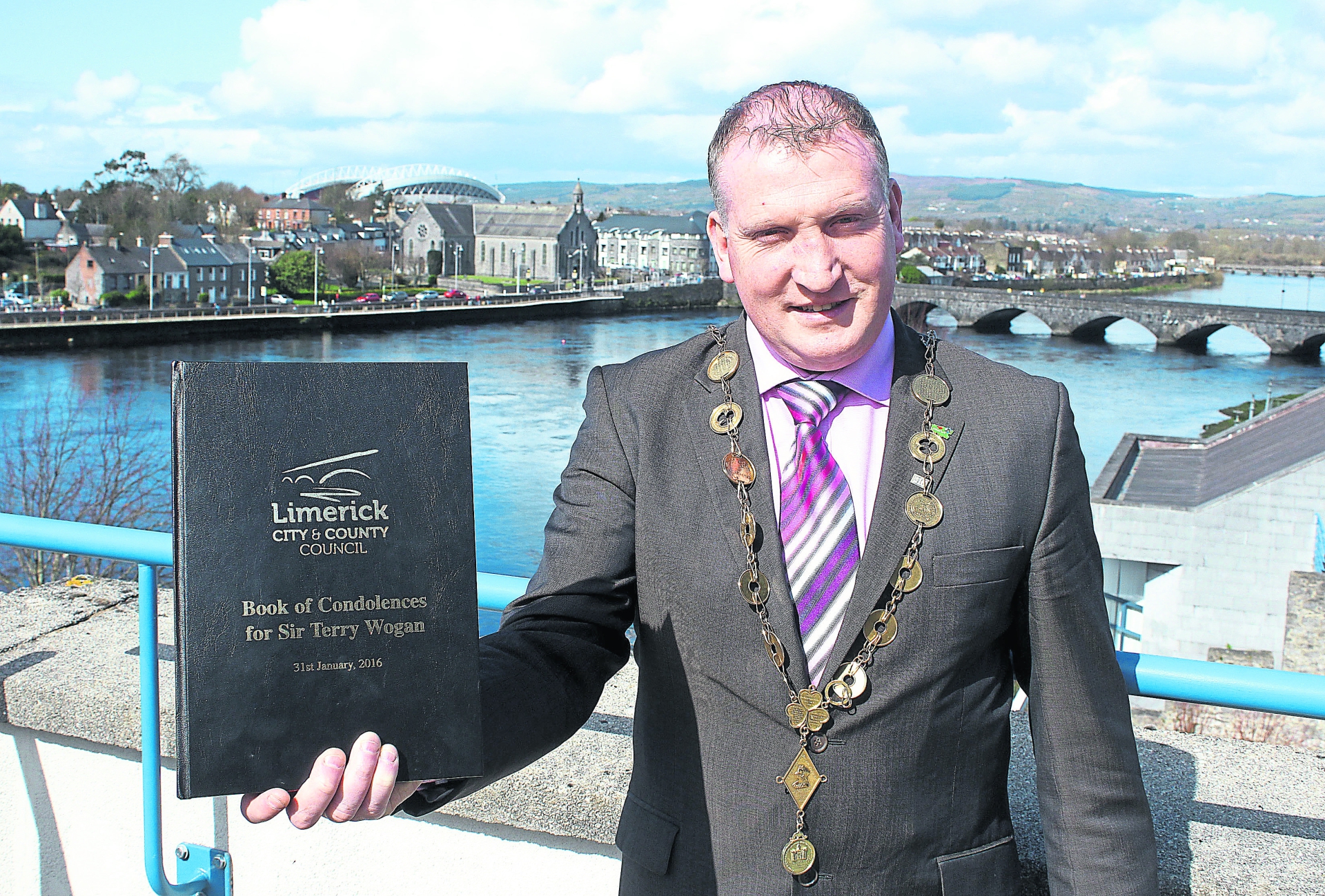 The book is brimming with personal memories and personal stories - all positive about the man who grew up in Elm Park off the Ennis Road and was educated at Crescent College.

“Remember you at the Old Crescent College run by the Jesuits. I remember you in short trousers with a chubby face. I hope you are regaling all in the great studio in the sky,” writes John M Leonard, Corbally.

Michael in Oxford thanks “dear Limerick for giving Sir Terry to the world".

“He was like that amazing old boy you’d once met on the golf course, or you’d sat next to in the pub when your mates have left you down. A real gem.”

Terry, of course, reached his vast audience through his BBC Radio 2 breakfast show.

Millions of early-morning listeners tuned in religiously to hear his soft, velvety voice deliver a commentary on the affairs of the day, with a witty and often deadpan humour. Some were seated around the breakfast table, tucking into their bowl of muesli or porridge;others were  behind the wheel on their way to work when one of his razor sharp witticisms would cut through the stress and tension of their day to tickle their funny bone.

“Those journeys to work would never have been the same without you. At traffic lights, you knew that people in other cars were laughing too and you just set everyone up for the day. May you make the angels smile too,” reads the tribute from The Room family from West Sussex.

Graeme Philips remembers Terry as “warm, witty, acerbic and a great observer of the human race and condition” while Peter Erasmus recalls “fond memories growing up in England listening to you talk about your wobbly bits in the mirror”.

Charles Kenny describes how he had to park on many occasions when overcome with laughter at a Janet and John story.

After his passing, there were many references to how Terry had acted as a bridge between Ireland and Britain when being Irish in the UK could be a very difficult cross to bear.

This is very much reflected across the pages of tributes.

“For those of us who lived in London in the 1970s, your gentle wit sliced through much of the anti-Irish racism and made us proud to be Irish and from Limerick. Slan,” reads one unsigned message .

Terry’s stinging commentary during the Eurovision brought him to a wider audience with many people who had no grá for the contest tuning in specially to hear his take on the  acts, the political manoeuvring of Eastern Europe’s voting and the half-time entertainment. His Irish charm meant that his sarcasm was always delivered in a witty, never waspish manner.

“You were always the best thing about the Eurovision Song Contest,” writes Rachael from Sheffield.

The most touching tributes in the book relate to deeply personal moments in the lives of the men and women who considered Terry to be their friend.

“He helped me in the dark days after my mum passed away from cancer. He helped bring a smile to my face and a little light to my dark heart,” signed simply, Keith.

Martin McCarthy, Kilmallock gives a little insight into the frustration felt locally when Terry could no longer be heard on the airwaves.

“During the ‘70s, was disappointed when radio was taken off Long Wave and your programme was  gone in this part of Ireland. My landlady, May Foley in Joseph Street, was so upset she could no long enjoy your show.”

Another message is short and sweet: “My granny was your cleaner,” signed, Ennis Road, Limerick.

A postcard which is sellotaped to one of the pages was sent from a Mrs AV Callaghan in West Waterford.

She writes: “I cannot get to Limerick in the time allocated for the book, so I hope someone may put my words and thoughts in it. I was startled at 6am, Monday, when I heard him being spoken of kindly but in the past tense, as I had seen him speaking on TV on Saturday night. Recorded?” she enquires.

"He is my age which always strikes hard. He spoke of death, was always courteous and dignified, well-informed, sensible and amusing (and singer of the Helston Floral Dance)”.

Doing what she does best, Limerick artist Una Heaton sketched a delightful portrait of a smiling Terry beside the words, “I hope that this city will honour his memory and contribution”. 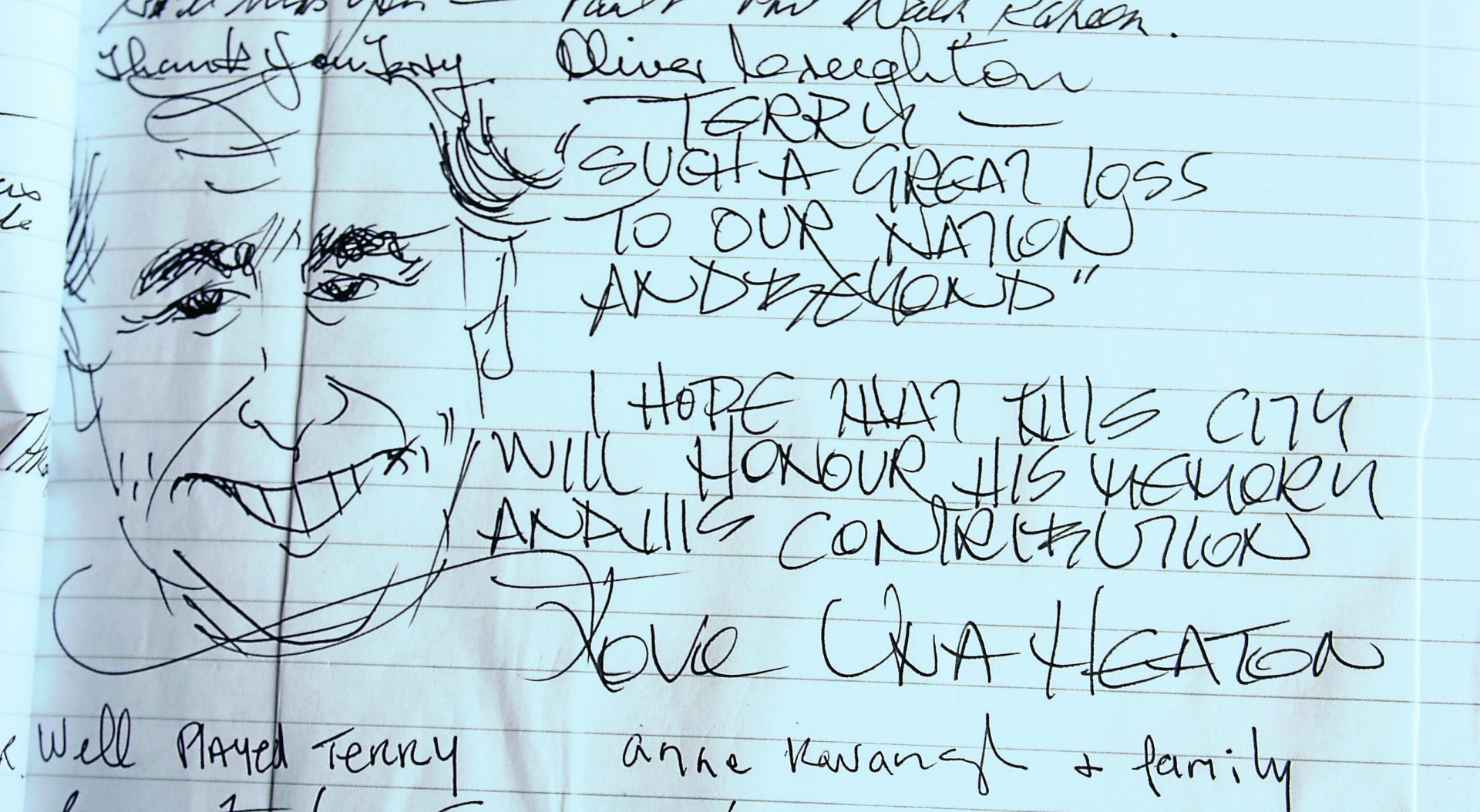 Chief Superintendent David Sheahan recalls meeting the broadcaster at the Mayor’s Ball in Limerick in 2012.

“True to your name!! Great craic and a major icon. May you rest in peace,” he writes.

Among those who paid tribute from overseas on the online book was HRH Crown Prince Alexander of Serbia (Yugoslavia) who posted: “ We will miss you Terry. When we lived in the UK before moving to Belgrade you gave us much pleasure. Thank you for brightening  up our lives.”

As we close the book of thousands of moving and revealing tributes, one offering by Limerick man Alan Lynch seems the most fitting to sign off with: “To a lovely man and a lovely voice. Heaven has got one of our best.”