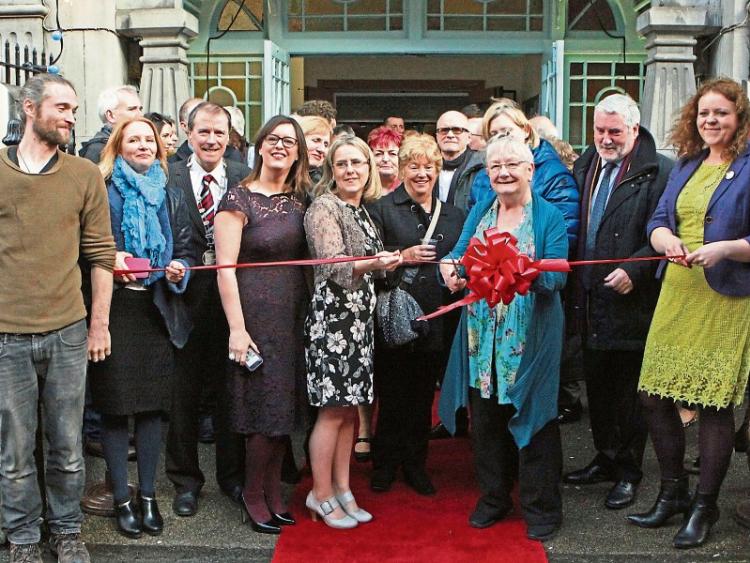 Founding artistic director of the Belltable, Brid Dukes, cuts the ribbon to relaunch the venue alongside Deputy Mayor of Limerick, Cllr Ger Mitchell, Gill Fenton and Louise Donlon of the Lime Tree

THE new Belltable programme manager has said she hopes the re-launched Limerick city venue can become “the powerhouse of vibrant work that it once was”.

Thirty five years since then President Patrick Hillery opened the Arts Centre, the venue – which has had several turbulent years – has been re-launched, with expanded facilities, under the stewardship of the Lime Tree Theatre.

Having been bought by City Council after the Belltable went into liquidation early in 2013, the former Sarsfield Credit Union next door to the theatre has now also been restored and included in the relaunch, offering rehearsal, office and ‘hot-desk’ space for local artists.

The Belltable’s re-launch was celebrated with a block party last Thursday night, and Lime Tree boss Louise Donlon, who has championed the Belltable for several years – said it was about “letting people see the building, experience it and get their own imaginations going as to what it can be used for”.

Great crowd at the relaunch, the weather is on our side! pic.twitter.com/pCgPUq9bHI

“We need people in there, they need to be talking to other writers, designers, actors - whatever - and that is what we want to try and do, make it a melting pot of the various arts.

“But fundamentally, that it would develop the arts in the city and maybe be a developmental hub to make much more professional work, made and created in the city and going out then to the region, nationally, internationally.”

New programme manager Marketa Dowling said it was a “real honour and a privilege” to be appointed to the position and her vision was for it “to become a hub of artistic activity”.

“I believe that good art speaks for itself. I believe that if we programme that speaks to people, they will come,” she said, adding that she believed the addition of the new space would allow the Belltable to become “the powerhouse of vibrant work that it once was”.

“The exciting revival of this significant venue means that it will once again be at the centre of arts development and practice in the city and will be a further boost to Limerick’s thriving arts sector,” she explained.

Brid Dukes, founding artistic director, was a special guest and said she wished “the Belltable the very best for the future”.