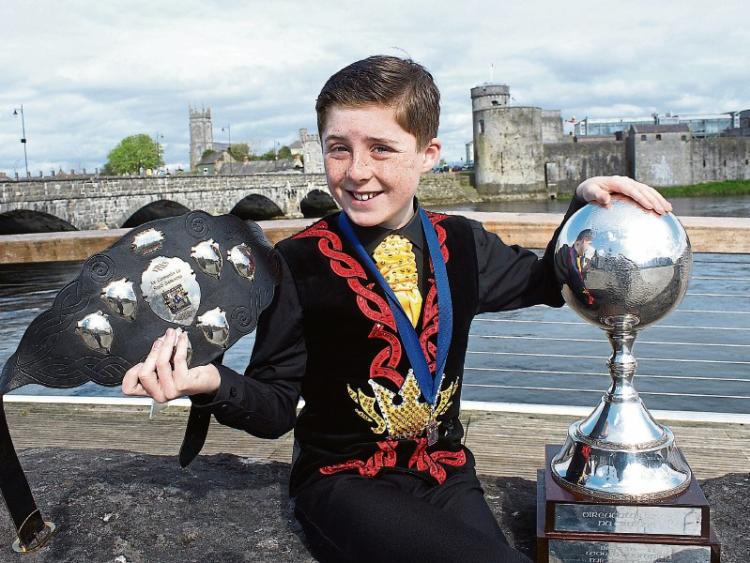 A dancing star in the making: Ballysimon student Fionn O’Sullivan-McCarthy

A BALLYSIMON lad has won the World Title for his age category at a prestigious Irish Dancing contest in Glasgow.

Fionn O’Sullivan-McCarthy, just 10, danced his way to glory at the World Championships. He triumphed in the under-11s category with what he described as a “manly dance”.

In winning the title, the youngster – a student of Sharon O’Brien of Scoil Rince Ui Bhriain – beat 46 other children, some a year older than him. They came from across the world, including Australia, America, New Zealand, England, Scotland and Ireland.

He won a trophy which is sponsored by Irish dance legend Michael Flatley, and a belt to mark his achievement, which is the highest level you can reach in Irish dancing.

When the judges announced he had won the title, Fionn admitted he “started crying”, he was so happy.

“All the boys in my group were equally as good, so I guess the judges just liked the steps which were put together for me,” the Gaelscoil Chaladh an Treoidh student said, “If you’re a boy, you have to a strong and be that bit louder than everybody else.”

Fionn – who has only been dancing since the age of six – practices his dancing for two hours a day six days a week. This is on top of his four classes a week at Scoil Rince Ui Bhriain, where he is coached for two hours a week.

He paid a warm tribute to his teacher Sharon saying: “She is incredibly important. I would not be here without her. She is the best teacher ever”.

Having previously won the Irish Dancing national title on three occasions, as well as similar competitions in Britain, and Scotland, not to mention the provincial Munster title, Fionn said he will “definitely” become a professional dancer.

Two male dancers he would like to follow in the footsteps of are Jack Quinn, a five-time world champion aged just 16, and John Lonergan, 22, from Cork.

“Both are amazing. Both of them are my inspirations,” he smiled.

The trophy, he added, will take “pride of place” in his family’s living room in Ballysimon.

Fionn’s proud mother Helen said both she and her husband, Fionn’s father Noel were “shocked but absolutely delighted” when his name was read out as the winner.

“He has worked incredibly hard since he started dancing years ago. This was his aim: he started with the aim of winning his first world title,” she said, “He is a perfectionist, and his teacher is excellent. They work very well as a team together. Neither of them are happy until a routine is perfect”.

Sharon added: “I was very proud. It is something a teacher strives for all their dancing career to get a world champion. It is the best feeling ever. It it reward for all the hard work we have put in – we could not have done any more!”

Scoil Rince Ui Bhriain was celebrating on the double, with its minor ceili team also winning a globe for coming third in their contest.

“The globes are very prestigious and hard to come by, as they are only awarded to the top three places in each competition at the worlds,” Sharon explained.