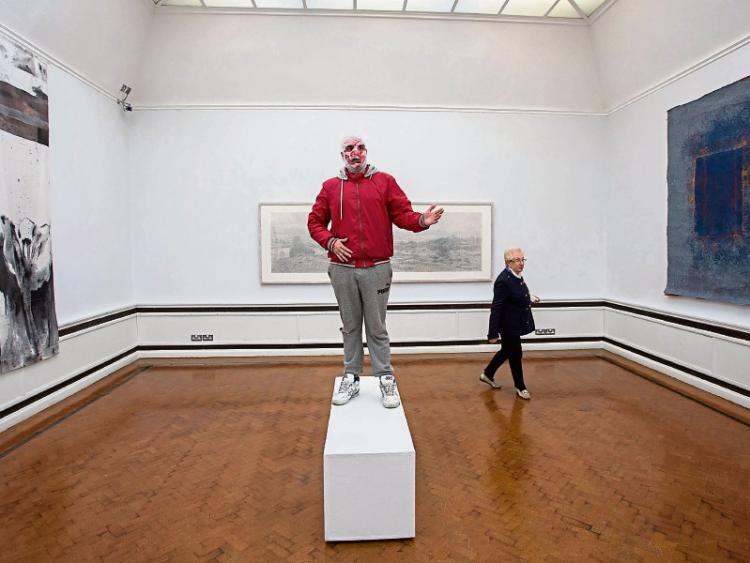 Blindboy Boatclub of the Rubberbandits, who return to ITV with their 'anarchic' game show next week, pictured in LCGA

CONTRARY to media reports suggesting otherwise, Limerick’s Rubberbandits have yet to agree a deal with RTE for the commission of a new television series.

The plastic bag-wearing duo have been pushed to the top of the national broadcaster’s radar after their one off tv special, The Rubberbandits’ Guide To 1916, originally broadcast on New Year’s Eve, became one of the most watched programmes on the RTE player.

That success lead to discussions with RTE on a new series, but, contrary to reports that a deal has been done, a source close to the satirical duo said that any potential deal had yet to be confirmed, with the duo waiting for confirmation of the terms on offer before a deal is finalised.

The Limerick duo are gearing up for the return of the Almost Impossible Game Show on ITV2 next week. The anarchic game show is back for a second run after the success of series last year, in which the ‘Bandits provided hilarious commentary as contestants put themselves through seemingly impossible tasks.

Mind your head, #AlmostImpossible is back! Tune in 6th April 9pm @ITV2. You won't regret it pic.twitter.com/ALlfkwcm2c

An insider explained that a spike in ratings caused ITV to renew the show, with viewer numbers showing an upward curve identical to the first season of the Keith Lemon-fronted Celebrity Juice, one of the broadcaster’s most successful shows.

“The Rubberbandits have proven to be very popular with UK TV audiences,” said an insider.

Blindboy Boatclub said he was “thrilled to be doing a second season. We love nothing more than laughing at English people falling over. It's making up for years of imperialism.”

Meanwhile, an interview that Blindboy recently gave to Channel 4 ahead of the 1916 centenary celebrations has been making waves online.

The interview, billed by Channel 4 as “a serious message about Ireland ahead of the 1916 Easter Rising centenary celebrations”, claims that the plastic bag-wearing duo have “become outspoken critics of contemporary Ireland”.

It has been viewed one million times on Facebook alone and was posted online under the heading: “Why does it take a man with a plastic bag over his face to talk sense about mental health?”.

Why does it take a man with a plastic bag over his face to talk sense about mental health in Ireland? @Rubberbanditshttps://t.co/zKrCLNLUuR

In the interview, Blindboy – who has been a ready campaigner and voice for the disaffected youth of his generation – says: “I only want to have a bit of craic, but I end up always finding myself in situations where I become a voice of reason – I shouldn’t be.”